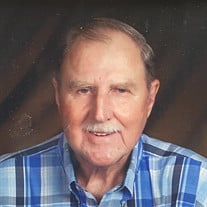 Clifton Wylie Allbright, 86, of Orange, Texas, passed away on August 25th, 2021. Wylie was born on July 6th, 1935 to Cliff and Grace Allbright in Orange,Texas. He graduated from Little Cypress High School, was a veteran of the United States Army stationed in Hawaii, worked at Firestone until his retirement, and was a member of Little Cypress Baptist Church. He was a kind and loving father and a proud grandfather. Wylie was also a passionate gardener and grilling expert offering his delicious tomatoes and BBQ to everyone. He loved deer hunting with his son and other family members; he often spoke fondly of their antics at the deer lease. He had a lake house on Toledo for many years and enjoyed having family and friends gather for good food and fishing. Wylie had an obsession with flashlights; he never was able to pass up any at the store, purchasing them as practical gifts for his grandchildren every Christmas. Wylie also delighted in social gatherings including dancing, playing cards, and dominoes. Wylie was predeceased by his parents, Cliff Allbright and Grace Clark Allbright, his spouse, Wynell Sapp Allbright, and his brother, Chuck Allbright. He is survived by his children, Corky Allbright and wife Patti, Karen Jeanine Flores and husband Robby, and Wendy Allbright; his step-children, Candy Beaver Swain, Paige Sampere and husband Brian, Randy Beaver and wife Peggy, and Steve Beaver and wife Patricia; his sister, Katy Latiolais and husband Darrel; his grandchildren, Amanda Moore and husband Chad, Lacie Gill and husband Sean, Magan Flores, Hunter Allbright and wife Lori, Andrew Flores, Taryn Vidalier and husband Kameron, Elissa Tate Toohey and husband Casey, and Jedd Tate; his great-grandchildren, Katie, Megan, Lucas, Alexis, Parker, Matthew, Mae, Max, Jasper, and Maverick; the mother of his children, Patsy; and his favorite sidekick, his labrador Kelly. There will be a celebration of his life on Tuesday, August 31, 2021 at 10:00 am at Claybar Funeral Home in Orange, Texas. The visitation will take place on Monday, August 30, 2021 from 5:00 p.m. to 8:00 p.m.

Clifton Wylie Allbright, 86, of Orange, Texas, passed away on August 25th, 2021. Wylie was born on July 6th, 1935 to Cliff and Grace Allbright in Orange,Texas. He graduated from Little Cypress High School, was a veteran of the United States... View Obituary & Service Information

The family of Wylie Allbright created this Life Tributes page to make it easy to share your memories.

Clifton Wylie Allbright, 86, of Orange, Texas, passed away on...

Send flowers to the Allbright family.