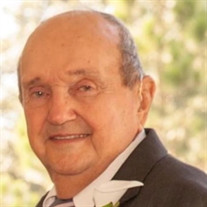 Wilson (Stan) James Stansbury Wilson (Stan) James Stansbury, 91, of Orange, passed away on October 28, 2021, at his home. Funeral services will be 10:00 a.m., Wednesday, November 3, at St. Francis of Assisi Catholic Church in Orange. Officiating will be Father Sinclair Oubre. Burial will follow at St. Mary Cemetery. Visitation will be from 6:00 p.m. to 9:00 p.m., Tuesday, at Claybar Funeral Home in Orange with a vigil and rosary starting at 7:00 p.m. Born in Port Arthur, Texas, on September 14, 1930, to Wilson Joseph and Mary (Borel) Stansbury. Wilson graduated from Stephen F. Austin High School and went on to serve in United States Air Force from 1950 to 1954 attaining the rank of Staff Sgt. in Korea and Japan. He retired from Gulf Chemical Co. of Orange as a shift supervisor in the reaction section with 28 and a half years of service, he went on to work for Hoist and Crane Co. in Beaumont and retired for the second time at 77 years old. Wilson was a member of St. Francis of Assisi Catholic Church of Orange, and many other groups including, the VFW Post 2775, American Rifle Association, and Harley Owners Group; Cowboy Chapter 4974. He was an avid hunter, fisherman, and shrimper. Wilson left an impact on many lives and will be dearly missed by all those who knew and loved him. He was preceded in death by his parents, Wilson and Mary Stansbury; children, Casey Hogan, Paula Mooneyham, and Stephen Stansbury; and sister, Margorie Helton. He is survived by his loving wife, Connie Stansbury; children, Chad Hogan, Resa Woolman, Cheryle Mooneyham, David, Michael, Phillip, Darryle, and Jon Stansbury; sister, Marie Viator; he also leaves behind 31 grandchildren, 34 great grandchildren, and 3 great-great grandchildren. Serving as pallbearers will be Chase Hogan, Taylor Hogan, Ashton Hogan, Dale Stansbury, Dawson Lampman, and Aaron Woolman. Honorary pallbearers are Braydon Lampman, Wade Woolman, Ben Stansbury, Mitchell Stansbury, Kenneth Stansbury, Darrin Stansbury, and Luke Stansbury.

The family of Wilson "Stan" James Stansbury created this Life Tributes page to make it easy to share your memories.

Send flowers to the Stansbury family.