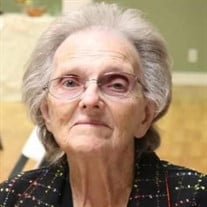 Wilma Irene Jenkins, 92, of Orange, passed away on June 15, 2021, in Beaumont. Funeral services will be 2:00 p.m., Monday, June 21, 2021, at Claybar Funeral Home in Orange. Officiating will be Reverend Jack Comer. Burial will follow at Orange Forest Lawn Cemetery in West Orange. Visitation will be from 5:00 p.m. to 7:00 p.m., Sunday, June 20, 2021, at Claybar Funeral Home in Orange. Born in Nacogdoches, Texas, on December 8, 1928, she was the daughter of Henry Heflin, Sr. and Mary (Washburn) Heflin. Wilma took care of many children in her home daycare from 1978 until her health declined. Many considered her their grandmother keeping some of the children from 6 weeks old until school age and after school. Wilma was a devout Christian and loved her church. She was a member of Circle Drive Baptist Church and made cookies for many years for Bible School. She loved to bake and was known for her wonderful Christmas candy. She was also known for her rolls and fried pies that were favorites of family and friends. Wilma loved to sew, embroider and quilt until her arthritis prevented her from doing so. She made baby quilts for so many newborns. She never really knew how talented she was. She will be greatly missed by many, she touched so many lives. She was preceded in death by her parents, Henry, Sr. and Mary Heflin; husband, J.W. Jenkins; and brother, Henry Heflin, Jr. She is survived by her daughter, Tammie Williams and husband George of Orange; grandson, Logan Boyett of Orange; step-great-grandsons, Seth Courtney of Houston and Kirby Courtney of College Station; nephews, Wayne Heflin, Gary Heflin and Jason Heflin of Nacogdoches; and niece, Barbara (Sissy) McDaniel of Nacogdoches. Serving as pallbearers will be George Williams, Ronnie Shugart, Wayne Hefllin, Jason Heflin, Ronnie Platt and Michael Barber. Honorary pallbearers are David Poole, Benny Stevens and Melvin Boyett, Jr. and Sam Comer.

Wilma Irene Jenkins, 92, of Orange, passed away on June 15, 2021, in Beaumont. Funeral services will be 2:00 p.m., Monday, June 21, 2021, at Claybar Funeral Home in Orange. Officiating will be Reverend Jack Comer. Burial will follow at Orange... View Obituary & Service Information

The family of Wilma Irene Jenkins created this Life Tributes page to make it easy to share your memories.

Send flowers to the Jenkins family.