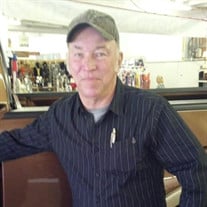 William “Bill” Lee Snyder, II., 73, of Orange, passed away on March 26, 2021, in Logan Township, New Jersey. A visitation for Bill will be held from 5:00 p.m. to 7:00 p.m., Friday, April 2, 2021, at Claybar Funeral Home in Orange with military honors to begin at 6:00 p.m. Born in Lansing, Michigan, on November 1, 1947, he was the son of William Simon Snyder and Vivian Snyder. Bill proudly served his country in the United States Navy during the Vietnam war. From the time his children were little they remembered the cross-country trips they would take with their parents, always willing to take on a new adventure. He worked at Chevron for a number of years, later going on to open and operate his own car lot. Bill took great joy in buying, selling, and restoring cars, and ultimately passing his knowledge onto his son, whom he would later go into business with for over 20 years. Everyone who knew him, knew his headstrong, incredibly stubborn personality and ever-willingness to “buck the system”. Bill hardly ever sat still, always working on his house, his property, and tending to his beloved horses and rabbits. He enjoyed spending time with his wife going to the casino and traveling to Cozumel. Bill loved his grandchildren who lovingly referred to him as “PawPaw Bill” and made sure to fill their childhood with laughter and fun. He made an impression on everyone he met and will be deeply missed by all those who came to know and love him. He was preceded in death by his parents, William and Vivian Snyder; and first wife, Patsy Kay Snyder. He is survived by his loving wife, Arlen Sturges-Snyder; children, William “Billy” Snyder, III. and wife Gabriella, and Heather Hardin and husband Drew; step-son, Nathan Haag and wife Heather; grandchildren, Alexis West and husband Luke, Hannah Wilson, Caleb Wilson, Chloe Wilson and Dash Haag; and great-granddaughter, Liliana Kay West; along with his sister, Joan Pitman and husband Charles.

The family of William "Bill" Lee Snyder II. created this Life Tributes page to make it easy to share your memories.