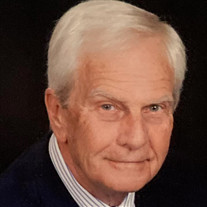 William Glenn Oliver, 80, of Orange, passed away on February 19, 2022, at Harbor Hospice in Beaumont. Funeral services will be 1:00 p.m., Saturday, February 26, at First Presbyterian Church in Orange. Officiating will be Reverend Lynn Ashcraft and Reverend Bobby Daniels. A reception for family and friends will follow the service. Born in Lufkin, Texas, on January 16, 1942, Glenn was the son of Richard and Mary Oliver. He graduated from Lufkin High School in 1960, before going on to attend and graduate from Stephen F Austin in 1965. He started his career with Owens Illinois in Lufkin and then later transferred to Orange. After retirement he was co-owner of Harmon Chevrolet with Don and Carlton Harmon. Glenn was also part of an investment ownership group at Orange Bank, where he also served on the Board of Directors. He was also an active member of First Presbyterian Church of Orange and served on the personnel committee, he was a member and President of the Orange Lions Club, Ducks Unlimited, President of the Heritage House. Glenn served 3 terms on the Orange City Counsel, planning and zoning committee as well as Mayor Pro Tem. Glenn loved spending time with friends, family, and his business associates and enjoyed many trips with his wife, he will be deeply missed by everyone who knew him. He was preceded in death by his parents, Reverend Richard and Mary Seale Oliver; and sister, Petie Chandler. He is survived by his wife of 57 years, Martha Oliver; daughter, Mary Claire Oliver; grandchildren, Jacob William Spiegel, and Samuel Oliver Mankin; his sisters-in-law, Eileen Simpson and husband David, Cathy Towns and husband Rhett, and Karen Vester; nieces and nephew, Gerry Ann Larabee and husband Tinker, Jan Crawford and husband John, Steve Mosley and wife Donna.

The family of William Glenn Oliver created this Life Tributes page to make it easy to share your memories.

William Glenn Oliver, 80, of Orange, passed away on February...

Send flowers to the Oliver family.