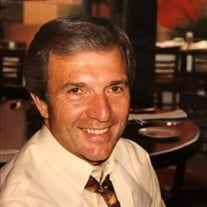 William Martin Hickman, III Once upon a time there was a father who loved his family so much that he gave all the love he had and became so tired that his body needed to rest. Rest In Peace my father. I look forward to seeing and loving on you again. He fought the good fight He finished the race He kept the Faith Glory be to God William Martin Hickman, III went to be with The Father on Wednesday, June 23, 2021 at 8:40pm in Crystal Beach, Texas. Beloved husband, father, grandfather, brother and friend. His name was Bill or Billy to those who loved him and called him friend. His favorite name was “Grumpy” given to him by his beloved grandchildren… so the name “Grumpy” was his most cherished and became a family favorite name for our lovable Grumpy. A long time resident of both Beaumont and Crystal Beach his life was long enough to make a difference to his loved ones, friends and business associates. Bill Hickman was born in Cleburne, Texas on January 15, 1941. He was quite the jet setter and globetrotter back then. He lived in Beeville, Texas and traveled the world early in his younger years studying abroad in France and Japan before returning back to the USA living in San Francisco, CA; Brooklyn, NY and Winter Park, FL before returning to his roots in Beeville and began working in the oil field and later started in the car business where he rose to be General Manager of the Beeville Chevrolet dealership. He then found his calling in the life insurance business joining the New York Life Insurance Company where he led the Nation for all first-year agents. He then moved to Portland, Texas to be the Regional Manager for New York Life and then onto Beaumont, Texas as a Managing Director for MONY-Mutual of New York. He later worked with T. E Moor Insurance and Talon Insurance Agencies. Bill was active in many professional associations and boards including YMBL, Rotary, Baptist Hospital, Leadership Beaumont, Schlessingers' Nursing Home, Crystal Beach Water Department, and many other business organizations, public, charitable and private. Bill was an avid sports fan. Especially for the Houston Astros and Lamar University Basketball where he had front row season tickets to all the games. He was also one of the best athletes back in his day! Winning basketball titles in Europe and awards in tennis, golf and bowling. He was a scratch golfer and club champion in both golf and tennis along with bowling perfect 300 games multiple times! He golfed with PGA professional golfer Bernhard Langer, winning a trophy in a Pro-Am tournament. Bill secretly wanted to be a professional baseball umpire or a sports announcer. Bill was a gentleman, a charmer, relentless conversationalist, a sharp dressed man and a great dancer. His values proceeded him and he lived life by always doing the right thing, telling the truth and working hard at what he did! Bill was always on time! If you measure a man by the company he keeps then he was a very rich man in the relationships he kept with family and friends. He took great joy and pride in talking about his children and his grandchildren’s accomplishments. If you were fortunate enough to know him then you loved Grumpy. He wanted to know all about you, caring about what you loved, and cherishing the moments and time he had with you. Bill, Billy or Grumpy… no matter what you called him… he called you friend. William Martin Hickman, III is preceded in death by his mother Dorothy Elizabeth Thompson-Faulkner and his father William Martin Hickman, Jr. and stepmother Grace Hickman. William Martin Hickman, III is survived by his loving wife Belinda Kay Hickman. His son William Todd Hickman and daughter-in-law Lillian Marie Hickman and grandchildren Zachary Todd Hickman and Lillian Elizabeth Hickman. His son Timothy Martin Hickman and daughter-in-law Stephanie Dianne Hickman and grandchildren Jonah Timothy Hickman and Hannah Alicia Hickman. His first wife Dorothy Elizabeth Hickman and his siblings Jan Schopfer, Charles Sonny Hickman, Sarah Hearn and Diane DeDe Bruton. His stepdaughter Fantasy Reynolds and son-in-law Donald Reynolds and grandchildren Riley Kay Reynolds, Audrey Mae Reynolds, Donald Cummins Reynolds and Annsley Grace Reynolds. His stepdaughter Dynasy Phelan and son-in-law Lan Phelan and grandchildren Julia Kay Phelan, Cameron Michelle Phelan, Bridget McDade Phelan, Michael Arthur Phelan III and Cullen Elizabeth Phelan. His stepson Ash Serratt and daughter-in-law Crystal Serratt and grandchildren Cailyn Lain Serratt and Camdon Hall Serratt William Martin Hickman, III Always on schedule, always on time….his timing was perfect and now he is perfect with God. A special thanks to caretakers who have represented the hands and feet of Christ… Mary Louise Hawkins, Robert Green, Elaine Snavley, Judy Smith and Chaplain Kim Woda. We are planning a memorial to celebrate the life of William Martin Hickman, III at Grumpy and Belle’s home 3194 Sea Castle Drive, Crystal Beach, Texas 77650. Time and date information will follow soon. The grief is real but there is Joy in the morning and we have the Peace that passes all understanding. To God be the glory as we live in our Savior Jesus Christ. Peace be with us all. Memorial for Bill Hickman and celebration of life will be held on Saturday, August 7th at 11 a.m., at Belinda and Bill Hickman's home 3194 Sea Castle Drive PO Box 1072 Crystal Beach, Texas 77650

William Martin Hickman, III Once upon a time there was a father who loved his family so much that he gave all the love he had and became so tired that his body needed to rest. Rest In Peace my father. I look forward to seeing and loving on... View Obituary & Service Information

The family of William Martin "Bill" Hickman III created this Life Tributes page to make it easy to share your memories.

Once upon a time there was a father...

Send flowers to the Hickman family.