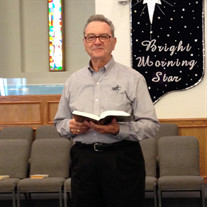 William (Bill) Robert Collier, Jr., 76, of Bridge City, TX, passed away on June 9, 2021, in Houston, TX. A visitation will be held on Sunday, June 13, 2021, from 5:00 p.m. to 7:00 p.m. at Winfree Baptist Church in Orange, TX. Funeral services will be held at the church on Monday, June 14, 2021, at 11:00 a.m. Burial will be held at Hillcrest Memorial Gardens. Bill was born at Banana River Naval Air Station near Cape Canaveral, FL, on October 2, 1944 to William Collier Sr. and Veda Smith Collier. He graduated from James Madison High School in Falls Church, VA, in 1962, and joined the United States Marine Corps, where he served four years and was a Vietnam veteran. He met the love of his life, Anette Sims, through letters written back and forth while he was serving in Vietnam. It was a true storybook romance. Bill and Anette married on February 11, 1967, and made a home in Port Neches, TX. Bill worked at Jefferson (Texaco) Chemical Plant for 25 years before hearing the call of God to be a minister. He earned an associate’s degree in ministry from Southwestern Baptist Theological Seminary. He pastored his first church at First Baptist Church in Fannett, TX, for 10 years before he was called as pastor of Liberty Baptist Church in Bridge City, where he served 14 years and then retired from full-time ministry in 2014. In retirement, he served in interim pastorates and pulpit supply in churches, and he served as a field ministry strategist for the Southern Baptists of Texas Convention. Bill loved God and loved people. As a 41-year-old deacon in a Baptist church, he realized Christianity was more than religion; it was a personal relationship with the Lord Jesus Christ. He placed his faith and surrendered his life to Christ. Shortly thereafter, he was called to ministry and served the Lord faithfully through love and unity. He was dearly loved by church members and people in the communities where he served. He had a passion for sharing the gospel of Jesus Christ with everyone he met, and a heart for evangelism took him on mission trips to numerous countries all over the world. In his younger days as a father, Bill coached PeeWee football and Little League baseball, and he supported anything his sons were involved in, from sports to music to ministry. He loved spending time in the outdoors hunting and fishing, and he was proud of making the Boone and Crockett list with his massive buck. Bill was always looking for a good laugh, whether it was by being goofy at Vacation Bible School or with his grandkids. As a Papa, he deeply loved his grandchildren and was their greatest fan, from watching them play outside to organized sports, band concerts, and other activities. Bill was preceded in death by his parents and a granddaughter, Arwen Eve Collier. He is survived by his wife of 54 years, Anette Sims Collier; four sons and daughters-in-law: Jeff and Emily Collier of Mauriceville, Jay and Sarah Collier of Granbury, Keith and Amy Collier of Groesbeck, and Brent and Patti Collier of Granbury; 10 grandchildren: Morgan, Jaxon, Tex, Jayden, Coralyn, Will, Blake, Allison, Knox, and Bear; a brother: Tom Collier and his wife Rhonda, of Jacksonville, FL; two sisters: Annette Dixon and her husband Jimmy, of Fayetteville, NC, and Shirley Houston and her late husband Steve, of Jacksonville, FL; a brother-in-law and sister-in-law: Gary and Neysa Sims of Broaddus, TX. Serving as pallbearers will be Jaxon Collier, Tex Collier, Will Collier, Blake Collier, Jayden Collier, Patrick Collier, Michael Collier and Eric Sims. Serving as honorary pallbearers will be Knox Collier and Bear Collier. The family would like to express their appreciation for the staff at Baylor St. Luke’s Medical Center in Houston, especially Dr. Rojas and Dr. Kaur, for their incredible, loving care. In lieu of flowers, donations may be made in memory of Bill Collier to Winfree Baptist Church in Orange, TX, or to your local church.

The family of William (Bill) Robert Collier, Jr. created this Life Tributes page to make it easy to share your memories.