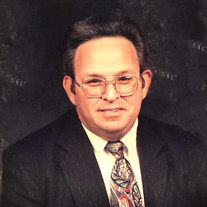 Willard “Harry” Harrison Ainsworth Willard “Harry” Ainsworth, 84, of Kirbyville, passed away on July 10, 2021, in Kirbyville. Funeral services will be 11:00 a.m., Thursday, July 15, 2021, at Claybar Funeral Home in Orange, TX. Officiating will be Brother Murray Ray. Burial will follow at Evergreen Cemetery in Orange, TX. Visitation will be from 9:30 a.m. to 11:00 a.m., Thursday, at Claybar Funeral Home in Orange, TX. Born in Voth, Texas, on September 13, 1936, he was the son of Henry Harrison Ainsworth Sr. and Lillie (Moore) Ainsworth. Harry was a hardworking butcher for many years that was able to retire from Market Basket to spend time with his family. He was a loving husband, father, grandfather, and all around amazing man. Harry enjoyed woodworking, traveling and always had a project to keep him busy. He was also a long time member of the Bridge City United Pentecostal Church, and was a devout man that loved being there. He will be missed dearly by all who knew and loved him. He was preceded in death by his parents, Henry Harrison and Lillie (Moore) Ainsworth; first wife, Bethel Harmon Ainsworth; and daughters, Janet Bebee and Rhonda Sanders. He is survived by his loving wife of 26 years, Robbie Ainsworth; son, Keith Ainsworth and wife Carol of Orange, TX; daughter, Debbie Causey and husband Arlen of Orange, TX; 12 grandchildren; and 17 great-grandchildren. Serving as pallbearers will be Chad Causey, Shawn Schneider, Ben Moore, Charles Gibson, Randall Gibson, and Koby Ainsworth. In lieu of flowers, memorial contributions can be made to Bridge City United Pentecostal Church, 2056 W Round Bunch Rd, Orange, TX 77630.

The family of Willard "Harry" Harrison Ainsworth created this Life Tributes page to make it easy to share your memories.

Send flowers to the Ainsworth family.