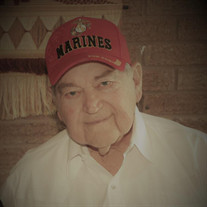 Walter John Webb, 95, of Vidor, Texas passed away surrounded with love and prayer on May 13, 2021. He was the husband of the late Jeanette Coon Webb for 65 years. Mr. Webb, known as “John”, was born in Bryson City, North Carolina on March 21, 1926the son of John W. Webb and Emma Cates. He grew up there until he enlisted in the United States Marine Corps during WWII. John served as Corporal in The Battle of Okinawa and was awarded the Purple Heart Medal. Shortly upon his return home, he made his way to Orange, Texas where he met the love of his life. John and Jeanette raised their family of five children. During his civilian life he ran his own accounting and printing shop. He eventually accepted a job with the Internal Revenue Service where he was able to retire and continue his own investments and adventures. He enjoyed hunting, fishing, bee keeping, gardening and everything outdoors. He was a wiz with numbers and always forward thinking with business investments. John was completely dedicated to his family and a true hero of the "Greatest Generation." His efforts to be there and do anything for his wife, children, grandchildren, and even neighbors in the community were the focal point of his life. Mr. Webb was proceeded in death by his parents; wife; son, John Keith Webb; daughter, Kaenette Webb; and siblings, Ronald, Waymon, Horace, and Lallen. He is survived and celebrated by his children, Paula and Thomas Chaney, Judith Webb Coulter and Kenneth and Marie Webb. Along with his 9 grandchildren; 22 great grandchildren; sister, Linda Kay Williams; and 12 nieces and nephews. Family and friends will be invited to pay their last respects at a later date.

The family of Walter John Webb created this Life Tributes page to make it easy to share your memories.

Send flowers to the Webb family.