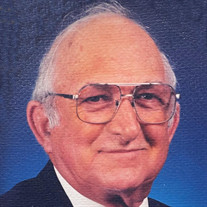 Walter Ernest Guice, 89, of Orange, passed away on March 3, 2021, in Orange. Funeral services will be 2:00 p.m., Sunday, March 7, 2021, at Faith United Methodist Church at 8608 Martin Luther King, Jr. Dr. Orange, Texas. Officiating will be Pastor Valerie Sansing. Burial will follow at Hillcrest Memorial Gardens. Visitation will be prior to the service, beginning at 1:00 p.m., at Faith United Methodist Church in Orange. Born in Port Arthur, Texas, on August 10, 1931, he was the son of Walter Emmett Guice and Eunice Marie (Hebert) Guice. Walter graduated from Starks high school. He loved baseball and coached little league for a number of years, carrying a deep love for the Astros throughout his well lived life. Walter faithfully served his Lord at Faith United Methodist Church, and went on to instill that deep love for God in his children. He enjoyed fishing, tending to his garden and travelling all over the United States. His happy spot was at the lake, surrounded by his loved ones. Walter adored his grandchildren who lovingly referred to him as “Grandpa” or “Pawpaw”. He was a wonderful family man and ever present in his kids and grandkids lives, often cheering on their teams as LCM Bears while they were in school. He was an avid Dallas Cowboys fan, looking forward to their games whenever they played. Walter later went on to retire from Chevron, where he spent years of dedicated work to provide for his family. He will be deeply missed by all those who came to know and love him. He was preceded in death by his parents, Walter and Eunice Guice; son, Walter David Guice; and brother, James Guice. He is survived by his loving wife of 65 years, Shirlee Guice; children, Valerie Pachuca and husband Steve of Orange, and Vicki King and husband Danny “Goat” of Bronson; grandchildren, Karla Lawson and husband Billy, Scott King and Beth Boyd, Addison Nichols, and Kaitlyn Williams; and great-grandchildren, Alec Lawson, Tristen Lawson, Ariana Lawson and Savannah Lawson; and sister, Dorothy Garner; along with numerous nieces and nephews. Serving as pallbearers will be Scott King, Billy Lawson, Alec Lawson, Tristen Lawson, Steve Faulk and Greg Beckett. Serving as honorary pallbearers will be Danny “Goat” King, and Steve Pachuca.

The family of Walter Ernest Guice created this Life Tributes page to make it easy to share your memories.

Send flowers to the Guice family.