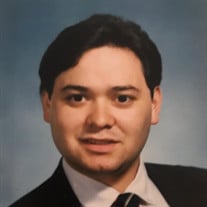 Victor Alfredo Holguin, III, 59, passed away unexpectedly in his home on August 11, 2021. Victor was born March 31, 1962 to Victor Alfredo Holguin, Jr. and Olivia A. Holguin in El Paso, Texas, where he lived until moving to Dallas, Texas with his two younger sisters. He graduated from Bishop Dunne High School in 1980, and went on to earn his Bachelor of Science in Electrical Engineering from Southern Methodist University. Victor joined the United States Navy, Nuclear Field Program in 1985 and served his country until 2001. Victor enjoyed a rewarding professional career as a mechanical engineer after his departure from the United States Navy. In 2005, Victor took up permanent residence in Orange, Texas, which he came to love, and where he lived with his beloved dog and companion, Copper. In his leisure, Victor served as an active member in the Knights of Columbus Catholic Fraternal Organization. Victor is survived by his mother, Olivia A. Holguin; sister, Margo Holguin; sister and brother-in-law, Bonnie and Les Young; daughter, Mallorie Alexandra Holguin; son and daughter-in-law, Victor Alexander Holguin and Sharon Chung; niece, Megan Young, and nephew, Mathew Young. Victor is preceded in death by his father, Victor Alfredo Holguin, Jr. Visitation for Victor will be held Thursday, August 19, 2021, at St. Mary’s Catholic Church in Orange at 9:30 a.m., with a rosary to follow at 10:30 a.m., and funeral services at 11:00 a.m. An additional funeral service will be held at 1:00 p.m., Saturday, August 21, 2021, at Calvary Hill Funeral Home North Chapel in Dallas, Texas. Entombment will follow at Calvary Hill Mausoleum.

The family of Victor Alfredo Holguin III created this Life Tributes page to make it easy to share your memories.