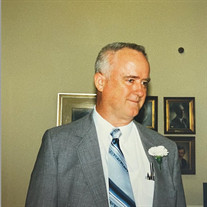 Thomas Penn Johnson, 87, of Orange, passed away on May 2, 2021, in Port Arthur. A visitation will be held at 10:30 a.m., Friday, May 7, 2021 at First Presbyterian Church in Orange. A memorial service will follow at 11:00 a.m., at First Presbyterian Church in Orange. Interment will follow services. A gathering of family and friends will be held after services, with a lunch to remember the well-lived life of Thomas. Born in Austin, Texas, on October 31, 1933, he was the son of Thomas Edward Johnson and Elizabeth (Penn) Johnson. His aunt and uncle operated the largest river boat in Texas on Lake Austin, and at the age of 14 he learned to pilot the boat, and was the youngest person licensed in the state of Texas to pilot a boat, quickly excelled in maneuvering it. Penn graduated college from the University of Texas. He worked for Levingston Shipbuilding Co. for many years as a structural engineer and designer. In 1976, he started Penn Engineering and was in business for 36 years. Even though Penn Engineering employed many people Mike Nies was the only employee from the beginning to end and was like a son to Penn. Penn was a longtime member of First Presbyterian Church in Orange, where he served his Lord faithfully. He belonged to numerous professional organizations related to engineering where he developed and grew several friendships and served on numerous committees. Penn led a life full of hard work, dedication, and service and will be deeply missed by all those he came to know and love. He was preceded in death by his parents, Thomas and Elizabeth Johnson; loving wife, Jane Johnson; brother, Marion Johnson; sister, Sissy Lawshae; and grandchildren, Sarah Patten and Jack Penn Patten. He is survived by his children, Cheryl Lynn Johnson Robertson and husband John, Scott Johnson, and Elizabeth Marie Johnson Cooper and husband Scott; grandchildren, Elizabeth Duhon and husband Erik, Laurie Echols and husband Colin, Jane Gaspard and husband Blake, and Thomas Cooper; six great-grandchildren; and two great-great-grandchildren.

The family of Thomas Penn Johnson created this Life Tributes page to make it easy to share your memories.

Send flowers to the Johnson family.