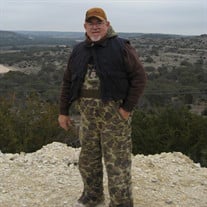 Thad Bellanger, 80, of Orange, passed away on June 15, 2021, in Beaumont. Funeral services will be 2:00 p.m., Saturday, June 19, 2021, at Claybar Funeral Home in Bridge City. Officiating will be Deacon Steve Obernuefemann. Burial will follow at Hillcrest Memorial Gardens in Orange. Visitation will be from 12:30 p.m. to 2:00 p.m., Saturday, June 19, 2021, at Claybar Funeral Home in Bridge City. Born in Port Arthur, Texas, on April 25, 1941, he was the son of Henry Bellanger and Judith Ann (Sharon) Bellanger. He graduated high school from Bishop Byrne in Port Arthur in 1960. Hawk served his country bravely with the United States Marines. He was employed as a Pipefitter and a member of Local 211 where he participated as an active member and later retired from Ameripol Synpol. Hawk was an avid hunter and fisherman, and also enjoyed gardening and was an excellent cook. Thaddeus went by many titles, including but not limited to, Hawk, Fatboy, Paw Paw B., and frequently gave those around him nicknames too. He was adored by everyone he knew and left a lasting impact on those he met. Hawk will be deeply missed by all those who came to know and love him. He was preceded in death by his parents, Henry and Judith Bellanger; sister, Martha Bellanger; and brother, Jimmy Bellanger. He is survived by his loving wife of 60 years, Catherine Faye Bellanger; children, Tammy Trahan and husband Stan, Troy Bellanger, Terry Bellanger and wife Kristen, and Tod Bellanger and wife Alicia; grandchildren, Mitch Trahan and wife Paije, Hunter Bellanger, Laken Bellanger, Anthony Bellanger and Austin Bellanger; and siblings, Chris Bellanger and wife Jeanne Anne and Joe Bellanger; along with numerous nieces, nephews, and other loving family. Serving as pallbearers will be Mitch Trahan, Hunter Bellanger, Anthony Bellanger, Austin Bellanger, Chris Bellanger and Joe Bellanger. Serving as honorary pallbearer will be Laken Bellanger.

The family of Thaddeus "Hawk" Jerome Bellanger created this Life Tributes page to make it easy to share your memories.

Send flowers to the Bellanger family.