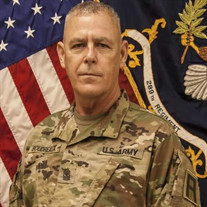 Steven Eric Boudreaux, 59, of Port Arthur, passed away on August 23, at his home in Orange. Funeral services will be 10:00 a. m., Wednesday, September 1, at Claybar Funeral Home in Orange. Officiating will be Mr. Rob Strause. Burial will follow of St. Mary Catholic Cemetery in Orange. Visitation will be from 9:00 a. m. to 10:00 a. m., Wednesday, September 1, at Claybar Funeral Home in Orange. Born in Port Arthur, on May 24, 1962, he was the son of Thomas Boudreaux and Velta (Whisnant) Boudreaux. Steven was a man that loved three things, working with his hands, spending time with his family, and the Army. He was a self-taught, adaptive woodworker and mechanic, able to fix anything he set his mind on. He enjoyed surrounding himself with family, friends and dear wife of 32 years, Deanna Boudreaux, most would say that he had a spirit for life. The Army was where he held his passion and devotion. Steven joined when he was 24 and served for 35 years. During bootcamp is where he met Rob Strause, who became his life-long friend. Steven was not a quitter and overcame those that tried to tell him he could never make it to a high rank. He did so by becoming a Sergeant Major. He loved his soldiers and they loved him right back, most even discovered that though he could come off stern, he was all bark and no bite. He was a man that cherished every person he encountered. Steven will be deeply missed by those that knew him. Steven was preceded in death by his parents, Thomas and Velta Boudreaux; daughter, Shelby Boudreaux; brother, Patrick Boudreaux; and parent-in-laws, Bill and Carol Rigney. He is survived by his beloved wife of 32 years, Deanna Boudreaux; son, Justin Boudreaux and wife Victoria Solis of Orange; siblings, Tom Boudreaux, Maxine Green, Von Boudreaux, Gordin Boudreaux, Brandy Campbell; brother-in-law, Curt Rigney; sister-in-law, Sheryl Loso and husband Kevin; his furbaby, Archie; granddog, Eddie; as well as numerous nieces, nephews, and other loving family and friends. Serving as pallbearers will be Rob Strause, Cody Strause, Mark Grizzaffi, Joel Bradbury, Douglas Germain, and Chad Brown.

Steven Eric Boudreaux, 59, of Port Arthur, passed away on August 23, at his home in Orange. Funeral services will be 10:00 a. m., Wednesday, September 1, at Claybar Funeral Home in Orange. Officiating will be Mr. Rob Strause. Burial will follow... View Obituary & Service Information

The family of SGM Steven Eric Boudreaux created this Life Tributes page to make it easy to share your memories.

Steven Eric Boudreaux, 59, of Port Arthur, passed away on August...

Send flowers to the Boudreaux family.