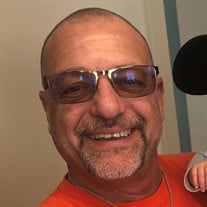 Stephen “Steve” Wayne Tarver, 60, of Orange, passed away on August 30, 2021, in Lake Charles, Louisiana. Funeral services will be 11:00 a.m., Wednesday, September 8, 2021, at First Baptist Church of Mauriceville. Officiating will be Pastor Kevin Brown . Burial will follow at St. Mary Cemetery in Orange. Visitation will be from 5:00 p.m. to 7:00 p.m., Tuesday, September 7, 2021, at Claybar Funeral Home in Orange. Born in Orange, Texas, on April 29, 1961, he was the son of Donald Wayne Tarver and Rose Marie (Rao) Tarver. To know Steve was to know goofiness in it’s purest form and the embodiment of big personalities. He was notorious for his warm spirit and ability to make friends with anyone he met. Steve was a big family man and made his kids a priority at every moment. He loved his kids, but his grandbabies held a special place in his heart. He was and will always be their “Pops” and “Pop Pop”. He attended First Baptist Church in Mauriceville with his family and kids and loved serving his great and merciful Lord and Savior. Steve enjoyed hunting and rebuilding antique cars. He loved spending vacations traveling to Colorado and the beach. He was preceded in death by his parents, Donald and Rose Tarver. He is survived by his loving wife of 39 years, Janna Tarver; children, Whitney Miller and husband Jonathan of Leander, Logan Tarver and wife Hannah of League City, and Kyle Stroman and wife Morgan of Delaware, Ohio; grandchildren, Kevin Stroman, Isla Tarver, Gwen Tarver and Aidan Miller; sister, Tammy Zimmerman; nieces and nephews, Amy Zimmerman, Shawn Zimmerman and wife Michelle; and great-nieces and great-nephews, Summer Zimmerman, Emma Zimmerman and Claire Zimmerman; loving in-laws that thought of Steve as a son, Jerry Chesson and Jane Chesson; brother-in-law, Jody Chesson and Adam Conrad; along with his beloved dog, Lucy. Serving as pallbearers will be Darrell Monceaux, Shawn Zimmerman, John Davis, Peewee Adams, John Tarver, Bryan Riley and Steve Hemby. Serving as honorary pallbearer will be James Cagle. In lieu of flowers, memorial contributions can be made to First Baptist Church of Mauriceville or the Samaritan’s Purse.

The family of Stephen "Steve" Wayne Tarver created this Life Tributes page to make it easy to share your memories.

Stephen “Steve” Wayne Tarver, 60, of Orange, passed away on August...

Send flowers to the Tarver family.