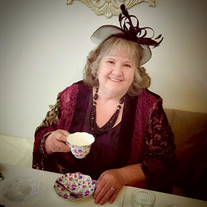 Not sure what to send?

Stephanie Churms Blackstone, 71, of Beaumont, passed away on May 6, 2022, at her home. Memorial services will be held at 11:00 a.m. on Saturday, May 21 at Christian Fellowship at 3950 La Pointe Parkway, Beaumont, TX 77706. Stephanie Jean Churms was born in Blackburn, England, on February 18, 1951, the daughter of Wilfred Churms and Grace Simpkin. As a daughter in a British military family, Stephanie grew up all over the world, including Lancashire, England, Germany, Singapore, and Northern Ireland. She graduated from the Rochdale School of Nursing at Birch Hill Hospital in Rochdale, Lancashire UK in 1972. She was a registered nurse and worked as a nurse manager for HMSS Home Healthcare in Beaumont, where she pioneered in the field of in-home IV therapy and ministered daily to AIDS and cancer patients as well as children requiring intravenous nutrition. In 1982 she joined the singles ministry at Cathedral in the Pines Christian Center where she met her husband Bob. They married on May 6, 1988, and continued in leadership in the singles group for many years after. In 2000, Stephanie founded Treasures of the Heart, a charity serving orphans in the former Soviet Union, and for 11 years worked to rebuild neglected orphanages and bring hope and joy in Jesus’ name to children in the most desperate need. Stephanie loved travel, imagination, and adventure, and was known for her elaborate tea parties and entertaining stories of her many adventures. Her love for people, her positivity and encouragement, and her faith in Jesus were boundless. She was deeply loved and will be missed by all her family and friends. She was preceded in death by her loving husband, Robert Blackstone, her parents, Wilfred Churms and Grace Simpkin, and her grandson Aidan Fincher. She is survived by her children, Jason Halbert, Rebecca Blackstone Fincher, Steven Halbert, Richard Blackstone; grandchildren, Kelton Halbert, Ering Fincher Gottes, Kennedy Halbert, Corbin Halbert, Abigail Fincher, Kaelynn Halbert, Anne Fincher, Laela Halbert, Emilia Fincher, Justin Fincher; brothers Michael Churms, Peter Churms, Mark Churms; and sisters Sharon Murphy and Alison Hewitt. In lieu of flowers, memorial contributions can be made online or by check to Ukraine Orphan Outreach, 18519 CR 5, Bertoud CO 80513, https://www.ukraineorphans.org. Please designate “Stephanie Blackstone Memorial Fund”; contributions will support single and widowed mothers and their children fleeing the war in Ukraine.

The family of Stephanie Churms Blackstone created this Life Tributes page to make it easy to share your memories.

Stephanie Churms Blackstone, 71, of Beaumont, passed away on...

Send flowers to the Blackstone family.