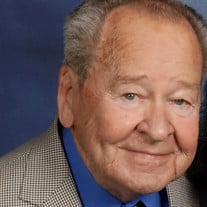 Samuel “Mitty” Bonner, 91, of Orange, passed away on August 19, at his home. Funeral services will be 10:00 a. m., Tuesday, August 24, at Claybar Funeral Home in Orange. Officiating will be Reverend Lynn Ashcraft and Reverend Rusty Dollar. Burial will follow at Hillcrest Memorial Gardens in Orange. Visitation will be from 9:00 a. m. to 10:00 a.m., Tuesday, August 24, at Claybar Funeral Home in Orange. Born in Huntington, Texas, on April 13, 1930, he was the son of Robert Hubert Bonner and Enola Mae (Crippin) Bonner. In his early years, Mitty was a boy scout, which served him well when he got lost in the woods once, he knew which way was North by the bark on the trees and he knew where the East was when the sun came up. At the age of 12, he used to shine the shoes of men stationed at the Orange Naval Base for pocket change. Mitty moved to Orange when the local Cotton Gin closed. He lived in Orange all of his life except for the four years he served in the Air Force. When he was stationed in Savannah, Georgia, he met and married his first wife. He came back to Orange and had three children; Sammy, Paula, and Rhonda. Mitty worked for Dupont until he retired. His job at retirement was a Precision Machinist Preplanner (Supervisor). While in the Air Force, his duties included: refueling airplanes during flight and he once flew from the East Coast to Africa. He said it was so hot that his hair dried out, curled up, and stayed that way. He said the flies were so big, he didn’t dare kill one because it would make such a mess.While serving in the Air Force, he made it to the rank of Staff Sergeant. Mitty was, also, a great teacher to his children and often shared his knowledge using his family bible to help prepare them for their lives and model themselves through his teachings. He was preceded in death by his parents, Robert and Enola Bonner; and brother, Preston Bonner. He is survived by his loving wife, Ruby Faye Bonner; children, Sammy Bonner of Bridge City, Paula Myers and husband Mike of Baxly, Georgia, and Rhonda Moss and husband Rick of Savannah, Georgia; step-children, Barney Duhon and wife Denise of Orange, and Ronnie Duhon and wife Rhonda of Orange; numerous grandchildren, great-grandchildren, nieces and nephews; as well as sibling, Elrita Eikenhorst. Serving as pallbearers will be Mike Myers, Mitch Myers, Daniel Bonner, Brant Duhon, Jeremy Farwell, and Raylon Duhon.

Samuel &#8220;Mitty&#8221; Bonner, 91, of Orange, passed away on August 19, at his home. Funeral services will be 10:00 a. m., Tuesday, August 24, at Claybar Funeral Home in Orange. Officiating will be Reverend Lynn Ashcraft and Reverend Rusty... View Obituary & Service Information

The family of Samuel "Mitty" Bonner created this Life Tributes page to make it easy to share your memories.

Send flowers to the Bonner family.