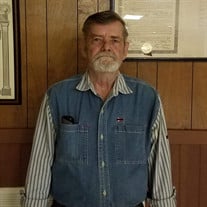 Ronnie Ele Gill, Sr., 72, of Orange, passed away on August 13, 2021, in Beaumont. A visitation will be from 5:00 p.m. to 8:00 p.m., Wednesday, August 18, at Claybar Funeral Home in Orange. Born in Alma, Georgia, on August 29, 1948, he was the son of James Ruby Gill and Edna (Vickers) Gill. Ronnie proudly and honorably served his county in the U.S. Air Force during the Vietnam War and later served in the U.S. Army. He was a jack of all trades who could do just about anything but retired as a boilermaker. Ronnie became the Commander of the American Legion Post 49 and loved being surrounded by other veterans in the community. He was a jokester and always kept people laughing until their face hurt. Ronnie could always be found dancing his heart out in his cowboy boots with his wife, Terry. He adored his children and grandchildren more than anything and left a lasting impact on many lives. Ronnie will be dearly missed by those who knew and loved him. He was preceded in death by his parents, James and Edna Gill; and brother Donnie Gill, Sr. He is survived by his loving wife of 22 years, Terry Gill; children, Wendy Ramirez and husband Mark, Timothy J. Sims, John E. Sims and wife Marcy, Ronnie E. Gill, Jr. and wife Kerry, Brandy Jackson, and Christina Kaczor and husband John; 17 grandchildren; 8 great grandchildren; siblings, Johnny Gill, Sr., Thedious Toney, Collen Buckley, Bobby Jean Kibodeaux, Martha Courmier, Ruby Sharp, and Barbara Montana; as well as numerous other loving family and friends. Cremation will be under the direction of Claybar Funeral Home.

The family of Ronnie Ele Gill Sr. created this Life Tributes page to make it easy to share your memories.

Send flowers to the Gill family.