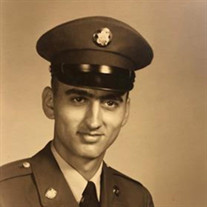 Ronald Perea, 77, of Orange,Texas, went home to rest on July 15, 2021, in Katy, Texas. Funeral services will be 11:00 a.m.,Thursday, July 22, 2021, at St. Mary’s Catholic Church in Orange. Officiating will be Father Joseph Daleo. Burial will follow at Orange Forest Lawn Cemetery in West Orange. Visitation will be prior to the service beginning at 9:30 a.m. with a rosary to follow the visitation at 10:30 a.m., all held at St. Mary’s Catholic Church in Orange. Leading the rosary will be Deacon Melvin Payne. Born in Orange on September 7, 1943, he was the son of Jesse J. Perea and Myra T. (Goldate) Perea. Ronnie went to St. Mary’s High School in Orange. After high school he served in the military. While serving in the United States Army he was awarded The National Defenss Service Medal, Vietnam Campain Medal, and the Vietnam Service Medal Bronze Service Star. Ronnie retired from Texeco after more than 40 years of dedicated work. He was a longtime member of the American Legion Post 49 in Orange. Ronnie (better known as Ron) was an active member for more than 43 years. He will be missed dearly by those who knew and loved him. He was preceded in death by his wife, Frances Perea; mother, Myra Perea; father, Jesse Perea; brother, Michael Perea; and nephew, Mark Barnes. Ronnie leaves behind his sister, Gayle Barnes and husband Gene of Bridge City; brothers, Jesse Perea Jr. and wife Evelyn of Kansas, Darrell Perea and wife Linda of Port Neches, Bruce Perea and wife Janice of Livingston; and 37 nieces and nephews. Serving as pallbearers will be Jeremy Macha, Brandon Longmire, Sean Longmire, Chris Barnes, Aaron Barnes, and Jason Barnes.

The family of Ronald Perea created this Life Tributes page to make it easy to share your memories.

Send flowers to the Perea family.