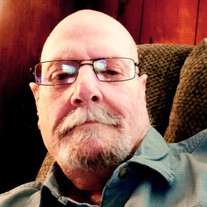 Roger Allen Mease, 70, of Orange, passed away on August 22, in Port Arthur. Memorial services will be 12:30 p. m. to 3:30 p. m., Tuesday, September 7, at Claybar Funeral Home in Orange. Born in Charleston, West Virginia, on August 31, 1950, he was the son of Lyle Mease and Nancy Belle (Berry) Mease. Roger was a Vietnam Vet and served his country with pride. He had a great love for the lake, fishing, and shooting guns. Most of all he loved his wife, twin daughters, and six grandchildren. Roger was preceded in death by his parents, Lyle and Nancy Belle Mease; and his brother, John David Mease. He is survived by his wife of 40 years, Rene Lynn Mease of Orange; children, Stacy Van Auken and husband Jordan of Orange and Alaina Mease of Orange; grandchildren, Isabella Anderson, Abigail Anderson, Jacie Van Auken, Natalie Van Auken, Tyrone Wilson, and Brianna Hughes; as well as his sister Carolyn Bearden of Bridge City.

The family of Roger Allen Mease created this Life Tributes page to make it easy to share your memories.

Send flowers to the Mease family.