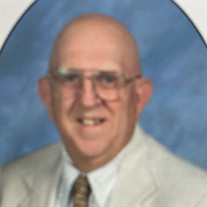 Roger Vernon Hall, 82, a resident of Focused Care in Orange Texas, passed away Saturday, May 1, 2021. A Memorial Service will be held at Cove Baptist Church, 1005 DuPont Dr, Monday, May 10, at 2:00 p.m. Officiating will be Reverend Jeff Bell. Visitation will be Monday, May 10, beginning at 1:30 P.M. at Cove Baptist Church. Born September 17, 1938 in Springfield, Vermont to Helen Alice Hall and Vern Hall, Roger graduated in 1958 from Black River High School in Ludlow, Vermont. While still in high school, he was a member of the Vermont National Guard. In January 1959, he entered the United States Navy. After graduating from boot camp at Great Lakes Naval Base, Illinois, he was based on Orange, Texas where he met Sandra (Sandy) Lou Sidan. They were married on June 11, 1960 in Lake Charles, Louisiana. Their first assignment together was at Norfolk, Virginia where Roger was stationed aboard the Destroyer Laffey DD-724 until 1962. He was then assigned to the Admiral’s Staff, Commander Naval Air Force, at NAS Norfolk, Virginia. Roger received his discharge in July 1964 and he and Sandy moved to Orange, Texas where Roger began working as an Operator and retired from Polysar Gulf Coast (Bayer). Before moving to Focused Care, Roger was a faithful servant to the Lord through the ministry of Cove Baptist Church. He was a deacon, choir member, and soloist, but the role he was most proud of was Evangelism Director. Roger was preceded in death by his mother, Helen Alice Merrill Hall of Ludlow, Vermont; father, Vern Linwood Hall of Ludlow, Vermont; brother, Eben Eugene Hall of Pensacola, Florida; brother, Richard Ellswood Hall of Ludlow, Vermont; wife, Sandra Lou Sidan Hall of Orange, Texas; nephew, Gene W. Hall of Austin, Texas. He is survived by his nephew, Don E. Hall of Wilmington, North Carolina; niece, Vicki H. Morrison of Colorado Springs, Colorado; niece, Marsha G. Short of Cusseta, Georgia. As well as the many people he influenced for Christ. He will be missed. In lieu of flowers, memorial contributions can be made to American Cancer Society at P.O. Box 22478 Oklahoma City, Ok 73123 or The Music Fund at Cove Baptist Church at 1005 DuPont Dr. Orange. Services are under the direction of Claybar Funeral Home in Orange.

Roger Vernon Hall, 82, a resident of Focused Care in Orange Texas, passed away Saturday, May 1, 2021. A Memorial Service will be held at Cove Baptist Church, 1005 DuPont Dr, Monday, May 10, at 2:00 p.m. Officiating will be Reverend Jeff Bell.... View Obituary & Service Information

The family of Roger Vernon Hall created this Life Tributes page to make it easy to share your memories.

Send flowers to the Hall family.