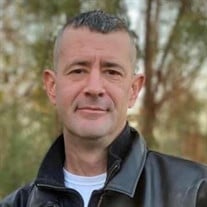 Robert “Rob” Gerald Folsom, 43, of Orange, passed away on August 2, 2021, in Orange. A memorial service will be held at 2:00 p.m., Monday, August 9, 2021, at Claybar Funeral Home in Orange. Burial will be held at a later date. Visitation will begin prior to the memorial service at 1:00 p.m., at Claybar Funeral Home in Orange. Born in Orange, Texas, on June 15, 1978, he was the son of Robert Walter Folsom and Margaret Ann (Fletcher) Folsom. Rob was a talented drummer and had a deep passion for music, many would say it ran through his veins. He graduated from West Orange- Stark High School, Class of 1996. Rob enjoyed fishing, working on cars, but above all else, spending time with his son. He was a wonderful father who adored his son more than anything. Rob will be deeply missed by all those who came to know and love him. He was preceded in death by his mother, Margaret Folsom; grandparents, George Fletcher and Ann Fletcher; and uncle, Georgie Fletcher. He is survived by his father and step-mother, Robert Folsom and Mary Ann Smith; son, Jaydison Folsom; sister, Christina Becerra and husband Carlos; nephew, Kyan Becerra; and niece, Serenity Becerra.

The family of Robert "Rob" Gerald Folsom created this Life Tributes page to make it easy to share your memories.

Robert “Rob” Gerald Folsom, 43, of Orange, passed away on August...

Send flowers to the Folsom family.