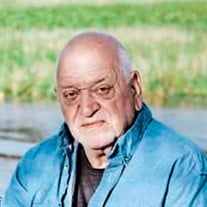 Robert “Bobby” Earl Dupuis Robert “Bobby” Dupuis, 77, of Bridge City, passed away on August 25, 2021, in Port Arthur. Funeral services will be 10:00 a.m., Friday, September 3, 2021, at Claybar Funeral Home in Orange. Family led by Darren Boullion with a burial to follow at Hillcrest Memorial Gardens in Orange. Visitation will be from 6:00 p.m. to 9:00 p.m., Thursday, at Claybar Funeral Home in Orange. Born in Orange, Texas, on September 11, 1943, he was the son of Earl Joseph Dupuis and Anne (Daigle) Dupuis. Growing up in Bridge City he worked at his fathers grocery store. After graduating from High School he married his high school sweetheart “Coonie” Carolyn. Bobby then joined the National Guard and started a family. He spent many years working in Saudi Arabia, Venezuela, Alaska, Missouri, and all over Texas. He was a longtime member of IBEW #479 and a volunteer firefighter for the Bridge City Volunteer Fire Department. After retirement he traveled all over to see his grandkids. Bobby was a loving husband, daddy, pawpaw, and brother that loved to spend as much time as he could with his family, always referring to his daughters as “his girls”. He also loved to fish and hunt and was adopted by all of his hunting buddies as “POPS”. Bobby was the kindest man, never meeting a stranger and having friends all over the world. He will be missed dearly by all who knew and loved him. He was preceded in death by his parents, Earl Joseph Dupuis and Anne (Daigle) Dupuis; loving wife, Carolyn Dupuis; and son, Wesley Dupuis. He is survived by his daughters, Tammy Roberts and husband Tony of Rayville, LA, Connie Dupuis Johnson and husband Mike of Crystal River, FL, and Patty Dupuis of Bridge City, TX; grandchildren, Tricia Shull, Derek Johnson, Samantha Chirichella, Corey Shull, Tech. Sgt. William R. Johnson “Bobby”, Randy Dupuis, and Stormy Sharp; 9 great-grandchildren and 2 on the way; siblings, Stanley Boullion and wife Babe, Sue Little and husband Ferel, and Jessie Dupuis and wife Lorraine; and longtime friend, Kathy Bailey. Serving as pallbearers will be Derek Johnson, Corey Shull, Randy Dupuis, Robert Chirichella, David Stephens, Dillon Sharp. Honorary pallbearer is Tech. Sgt. William R. Johnson currently serving in Japan.

The family of Robert "Bobby" Dupuis created this Life Tributes page to make it easy to share your memories.

Send flowers to the Dupuis family.