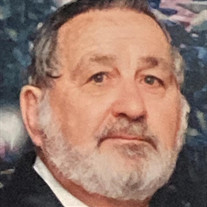 Robert “Bob” Phillips, 87, of Orange, Texas passed away on December 16, 2021 in Beaumont, Texas. Funeral services will be held at 2:30 p.m., Tuesday, December 21, 2021, at Claybar Funeral Home in Orange. Officiating will be Pastor Jay Thomas, of MacArthur Heights Baptist Church in Orange. Visitation will be held prior to the service beginning at 1:30 p.m. Born in Nameoki, Illinois, on June 22, 1934, he was the son of Virgil Raymond Phillips and Mary Ellen (Swain) Phillips. Bob proudly served his country for over 25 years in the United States Army as well as the United States Navy. He was a dedicated member of the Madison Lodge #126, Eastern Star, Scottish Rite, and Shriners. Bob always had to be tinkering with something and there was nothing he couldn’t make. He was an avid woodworker, with the ability to craft anything, even making beautiful dollhouses for his loved ones. One of Bob’s favorite things to do was spending time on the farm and fishing with his friends Porter and CJ. He left an impact on all who knew him and will be missed for years to come. He was preceded in death by his parents, Virgil and Mary Phillips; his wife of over 60 years, Patsy Phillips; his sister Betty Ridge; his brothers, Virgil Phillips, Jr. and Don Phillips; and his daughter Sunny Bea Greenwood. He is survived by his daughter, DeDe Reeves; his grandchildren, Teresha Caswell and husband Nathan, Robert Reeves,Cody Greenwood, and Chris Greenwood; his great-grandchildren Sean Caswell, Luc Caswell, and Kylie Greenwood; and his brothers, Bill Phillips, and Kenny Dale Phillips. Honorary pallbearers are Robert Reeves, Nathan Caswell, Sean Caswell, Eugene Nance, Cody Greenwood, and Chris Greenwood.

The family of Robert "Bob" Phillips created this Life Tributes page to make it easy to share your memories.

Robert “Bob” Phillips, 87, of Orange, Texas passed away on December...

Send flowers to the Phillips family.