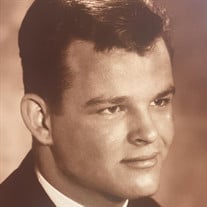 Ricky Lavon Hargrove, 75, of Orange, went to be with Jesus Christ, his Lord and Savior, on November 21, 2021, while surrounded by his loved ones. A Celebration of Life Worship Service for Ricky will be held Wednesday, November 24, 2021, at 2:00 PM at the First Presbyterian Church of Orange. Born in Beaumont, Texas on September 10, 1946, Ricky was the son of Burke Alan Hargrove and Kathryn “Kate” Hargrove of Silsbee, Texas. He attended Silsbee schools until his senior year when he moved to Orange and graduated from Stark High School in 1965. Ricky was an excellent athlete playing sports all of his life, including football for the Silsbee and Stark High School Tigers and boxing for the YMBL Golden Gloves while in college. He studied at Texas A&M University, earned a Draftsman Certificate from Lamar Institute of Technology, and attained a Bachelor of Science Degree in Theology from Kingsway Christian College & Theological Seminary. Ricky was an active member of First Presbyterian Church in Orange for 49 years where he served as an elder, greeter, and lay leader. He was a member of the Men of the Church, the Walk to Emmaus Ministry and the Kairos Prison Ministry. Additionally, he served as a Victim Relief Chaplain. He was also a member of the Orange Noon Lions Club and the Father/Daughter Indian Princess Organization when his daughters were young. He was an incredibly kind, caring, generous and loving man, setting a Christian example of how to live. Ricky held many roles in his lifetime, but husband, father, and Papa were his favorite titles. He was witty, funny and a proud supporter of his wife, children and grandchildren, whom he loved and adored immeasurably. He followed and supported all of their activities from dance recitals to swimming tournaments to ball games to theatre performances and to speaking engagements. He retired from Dupont as an Instrumentation and Controls Technician and went to work as a Landman for Independent Landman Services. Previous to his employment at Dupont, he was the Office Manager and Broker/Agent for Conway & Company Real Estate, a telegrapher at Southern Pacific Railroad, a clerk at Atchison, Topeka and Santa Fe Railway, and a map draftsman at Arthur Simpson Land Surveying. Ricky made a positive impact on all those he met with his encouraging spirit, and he will be missed deeply by all who knew and loved him. He was preceded in death by his parents, Burke and Kate Hargrove; siblings, Larry Hargrove and Lyn Hargrove; Aunt Jayne Barnes, whom he loved like a sister; and brother-in-law, Dickie Colburn. He is survived by his high school sweetheart and loving wife of 52 years, Pauline Colburn Hargrove; daughters: April Michele Hargrove King and husband, Trey; and Jeannie Rickele Hargrove Alexander and husband, Bruce. His grandchildren: Kenedie Kate King Beadle and husband Marty, Connor Wayne Alexander, Jordan Avery Alexander, Ricki Michele King, and Presley Taylor Alexander. In addition, siblings: Van Hargrove and Steve Hargrove; brother-in-law, Jeep Colburn and wife Carolyn; sister-in-law, Karen Colburn; along with numerous nieces, nephews, and other loving family members and friends. Serving as honorary pallbearers are Bruce Alexander, Trey King, Connor Alexander, Jordan Alexander, Marty Beadle, Jeep Colburn, J.J. Colburn, and Rafe Colburn. Visitation and a reception will be held immediately following the service in the Fellowship Hall of the Church. In lieu of flowers, memorial contributions can be made to First Presbyterian Church at 902 Green Ave. Orange, Texas 77630.

Ricky Lavon Hargrove, 75, of Orange, went to be with Jesus Christ, his Lord and Savior, on November 21, 2021, while surrounded by his loved ones. A Celebration of Life Worship Service for Ricky will be held Wednesday, November 24, 2021, at... View Obituary & Service Information

The family of Ricky Lavon Hargrove created this Life Tributes page to make it easy to share your memories.

Ricky Lavon Hargrove, 75, of Orange, went to be with Jesus Christ,...

Send flowers to the Hargrove family.