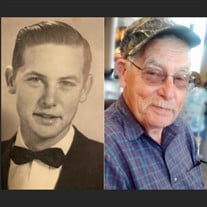 Rayburn Max Matthews (Ray) of McLewis community in Orange, Texas, passed away peacefully at home on Saturday, March 6, 2021, at the age of 84 after a valiant battle with ALS. He was born in Fayetteville, NC, on November 4, 1936, to Oscar Haywood Matthews and Maggie Ellen Lewis Matthews. He was raised in Grays Creek, North Carolina, and started working on the family farm at a young age. He served in the National Guard in North Carolina from 1956 until he moved to Orange. He farmed until he moved to Orange in 1958 and began working at DuPont Sabine River Works in Orange where he worked for 37 years until his retirement in 1993. Ray returned to North Carolina often to visit his family and friends and when there was a class reunion he was sure to schedule his visit “home” so he could attend. He attended Grays Creek High School in Hope Mills, North Carolina, where he was one of 16 graduates in his graduating class of 1955. He was voted “The Wittiest” in his class and he never lost his sense of humor. Ray loved to tinker and he was a master mechanic often providing advice and expertise. There wasn’t anything that he couldn’t fix. He was an avid reader and could intelligently discuss any topic. He enjoyed playing golf and horseshoes, camping, hunting, fishing, and watching and attending Nascar races. He loved riding his Harley-Davidson and was a long-time member of the Cowboy HOG Chapter, often making road trips with his bride. He loved to travel having visited all 50 states and traveling to Europe. In his retirement years he enjoyed playing dominos with his friends and boating and fishing with his friend, James Hennigan. He loved to garden as he was always a farmer at heart and loved being outdoors in his shop. He loved his grandchildren and great-grandchildren dearly. When they were younger they could often be found at Granny and Papas and when they were older he could always be found in the stands at their sporting events and at their¬ activities. He was preceded in death by his parents, his son, Charles Allen Matthews, his granddaughter, Rachel Taryn Ford, his brothers, Harold, Gilbert (Gib), Gerald (Jerry), and his sister, Joanne Wood. He is survived by his wife of over 65 years, Eva Delores Privette Matthews, (Delores) of McLewis, his son, Jeff Matthews and wife Nancy of McLewis, his daughter, Gail Maddox and husband Steve of Orange. He is also survived by 3 grandchildren, Charlie Matthews, Patty Crocker and husband James, all of Orange, and Daniel Ford and Lynae of Kerrville and 4 great-grandchildren, Jackson and Emily Crocker of Orange, and Ryleigh and Taryn Ford of Kerrville. He is also survived by his nieces, nephews, cousins and extended family in North Carolina. The funeral will be held at Claybar Funeral Home in Orange on Saturday, March 13, with visitation from 12:30 pm to 2:00 pm and the service immediately following at 2:00 pm with the Reverend Bobby Spross officiating. Pallbearers are Charlie Matthews, Daniel Ford, James Crocker, Stephen Maddox, Jr., Robb Maddox, and Bo Delaney. Honorary pallbearers are James Hennigan, Prentice Scarber, Mark Wood, Bruce Skinner, Davis Privette and Greg Eastwood. A special thank you to the Texas Home Health Care and Hospice and his caregivers that provided loving and compassionate care. In lieu of flowers, donations may be made to the ALS Foundation at www.donate.als.org/donate

Rayburn Max Matthews (Ray) of McLewis community in Orange, Texas, passed away peacefully at home on Saturday, March 6, 2021, at the age of 84 after a valiant battle with ALS. He was born in Fayetteville, NC, on November 4, 1936, to Oscar Haywood... View Obituary & Service Information

The family of Rayburn "Ray" Max Matthews created this Life Tributes page to make it easy to share your memories.

Send flowers to the Matthews family.