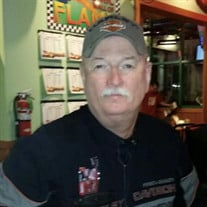 Randy Thomas Johnson, 71, of Orange, passed away peacefully surrounded by family on April 13,2021 at St. Elizabeth Hospital in Beaumont, TX. Funeral services will be 2:00 p.m., Sunday, April 18, 2021, at Claybar Funeral Home in Orange. Officiating will be Pastor John Fortenberry. Burial will follow at Orange Forest Lawn Cemetery in West Orange. Visitation will be from 5:00 p.m. to 8:00 p.m., Saturday, April 17, 2021, at Claybar Funeral Home in Orange. Born in Orange, Texas, on September 29, 1949, he was the son of William “Bill” Johnson and Maurine Collins Johnson-Bryant. Randy, while “out cruising the drag” one night, as many teenagers of the late ‘60’s did, he had his eye on a pretty girl who was also “cruising the drag” with her sisters and other friends. He asked a mutual friend to introduce them. Although my mom, Anita, was a shy girl, she confided in her sister that she did not know which was better looking, my Dad or his ‘67 red Mustang Fast-Back. After letting her take the wheel, the rest is history. Randy and Anita married in December 1970 and later had a daughter, Carrie Leigh and a son, Nicholas Lee. Randy was a member of Boilermakers Local 0587, receiving his apprenticeship card in 1968. He worked at various refineries and chemical plants back in his early career but settled in at the DuPont facility in Orange for approximately the last 30 years. He finished his tenure as a Lead Inspector before eventually retiring from Kellog-Brown & Root in 2017. Randy was a member of the Orange Gun Club for several years and enjoyed participating in trapp competitions and other competitive shooting. He also enjoyed fishing and boating. Both of those hobbies he shared with his son Nick and grandson Josh. What he most treasured was riding his Harley-Davidson Street Glide. This was a passion he handed-down and shared with his daughter Carrie from an early age. He was preceded in death by his wife, Anita Reed Johnson; parents, William & Maurine Johnson; and sister, Phyllis Karon Carmack. He is survived by his children, Carrie Johnson and partner Rhonda Ivey of Orange and Nicholas Johnson of Orange; grandchildren, Joshua Johnson, Charles “Charlie” Johnson and Chase Johnson; along with several nieces and nephews. Randy will also be missed by his beloved puppy, The Dude. Serving as pallbearers will be Nicholas Johnson, Jerett Hebert, Perry Lee, Jay Davis, Greg Hock and Tommy Gordon. Honorary pallbearers are Joshua Johnson, Chase Johnson, Charles “Charlie” Johnson, Lloyd Carmack and Louis Herrera.

The family of Randy Thomas Johnson created this Life Tributes page to make it easy to share your memories.

Send flowers to the Johnson family.