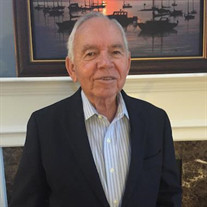 Prentice Edward Ashworth Sr., 85, of Orange, went home to the Lord on June 20, 2021, passing peacefully after a long illness. He was predeceased by his parents Gertherd Olen Ashworth, Sr, and Thelma Edith Ashworth, by his son Prentice Edward Ashworth, Jr., his brother Rev. G.O “Sonny” Ashworth, his sisters Mildred Margaret Rose Ashworth and Rebecca Louise Stanley, and by Barbara Laughlin-Ashworth. He is survived by his daughter Charlotte Ashworth-Sharpe and husband (Mark) of Charleston, South Carolina and son Roger Glenn Ashworth and wife (Astrid) of Laguna Niguel, California, three grandchildren, Camryn Sharpe, Andre Ashworth, and Anthony Ashworth. Siblings: Mirian Eileen Hertzler, Wanda Faye Butler and husband (James), Calvin William Ashworth and wife (Linda), Nina June Howard, Sharon Ruth Woodard and husband (John), Lynn Jackson Ashworth, and Marvin Wendell Ashworth. Beloved and extended family: Close friend and companion Donna Ashworth, Chrystal Miller and husband (Zachary), Rayleigh Bland, and Livvy Bland. Prentice was born on May 6th 1936 in Starks, Louisiana. He later moved to Orange, the historical home place of the Ashworth family, and graduated from Lutcher Stark High School in Orange. He remained in Orange for most of his life. Although Prentice had early training in Chicago as an electrician engineer, he was a talented and sought-after general contractor by trade. A hard worker, he was always generous with his labor and willing to lend a hand and apply his construction skills to the benefit of his many friends and neighbors and those in need. Prentice loved life! An avid outdoorsman, he loved hunting, fishing, and boating. He was a long-time member of the Orange Boat Club. He was also a lover of classic rock, country, jazz and other live music, and knew many of the prominent musicians in the East Texas music scene over the years. Although a gentle quiet man he loved to be around friends and family while telling some great stories. He will be sorely missed by his family and his many friends. In lieu of flowers, donations may be made to the Parkinson's Foundation. The family will receive visitors from 5:00 to 7:00 p.m. Friday, June 25, 2021, at the Claybar Funeral Home in Bridge City. The funeral service will be Saturday, June 26, at 10:00 am, at the Claybar Funeral Home in Bridge City with entombment to follow at Oak Forest Lawn Cemetery in West Orange, officiated by Rev. Jeff Bell. Immediately following Saturday’s funeral service and the entombment, the Ashworth Family invites all family and friends to a reception in Mauriceville, Texas on Saturday, June 26 at “The Venue at Duhon Square” behind Tuffy’s 11261 Hwy 12 N. Orange, TX 77632.

Prentice Edward Ashworth Sr., 85, of Orange, went home to the Lord on June 20, 2021, passing peacefully after a long illness. He was predeceased by his parents Gertherd Olen Ashworth, Sr, and Thelma Edith Ashworth, by his son Prentice Edward... View Obituary & Service Information

The family of Prentice Edward Ashworth, Sr. created this Life Tributes page to make it easy to share your memories.

Prentice Edward Ashworth Sr., 85, of Orange, went home to the...