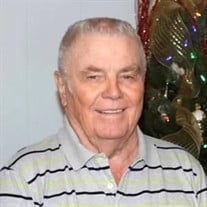 Philip Lane Brown, 86, of Orange, passed away on March 15, 2021, in Beaumont. A graveside service will be held at 10:00 a.m., Friday, March 19, 2021, at St. Mary Cemetery in Orange, with burial to follow. Officiating will be Deacon Melvin Payne. Born in Tenaha, Texas, on October 29, 1934, he was the son of Grady “Buster” Lane Brown and Pauline Kyle Brown. Philip graduated from Tenaha High School when he was just 16 years old. He had always been an avid Longhorn fan but chose to stay close to home for college. He loved his college experience at Stephen F. Austin. Philip was a secretary of the Sawyer’s Social Club and participated in all of the intramural sports. He earned a Bachelor of Science degree in 1955 and his Masters of Education in 1957. His first teaching and coaching job came in 1955 at Little Cypress where he coached three sports and taught five history classes. In 1961, Philip married the love of his life, Carolyn. He considered his 59-year marriage his greatest achievement in life. He wrote, “The fact that I could find and marry the finest person I have ever known is a bonafide miracle.” They moved to Houston where he taught and coached for more than 15 years. In 1977, he became the Head Coach and Athletic Director in Vidor where he stayed until his retirement in 1991. He said one of the best days of his life was finding out that he would become a father after 8 years waiting for it to happen. He was proud of his only child Corby. They shared a love of sports and all things Texas (UT). Philip wasn’t much for idle chit-chat but when he had something to say it was always worth listening to. He was of the belief if it’s worth doing it’s worth doing right. Many of his former players could attest to that fact. He was a man who earned respect and led by example. Philip wanted those he taught to be productive members of society. He didn’t tolerate stupidity. He loved being a coach but he was most proud of being “Pappaw” to his granddaughters Laney and Kylie. They were perfect in his eyes and he loved to brag about their accomplishments. He was preceded in death by his parents, Buster and Pauline Brown. He is survived by his loving wife, Carolyn Faye Marshall of Orange; son, Corby Lane Brown and wife Tronya of Round Rock; granddaughters, Laney Alexandra Brown of Kansas City, Missouri and Kylie Alyssa Brown of Austin; brother, William Alvy “Billy” Brown of Longview; and brother-in-law, Philip Darryl Marshall and wife Marsha of Orange; as well as five nephews and two nieces. He had numerous friends and it would be difficult to mention them all, however, he enjoyed an over 50 year friendship with Robert “Bobby” and Mary Ann Brezina, whom he said were like a brother and sister to him.

The family of Philip Lane Brown created this Life Tributes page to make it easy to share your memories.

Send flowers to the Brown family.