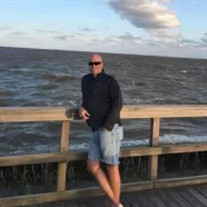 Patrick Howard Hammond, 52, of Port Arthur, passed away on April 6, 2021, in Port Arthur. A memorial service for Patrick will be held from 6:00 p.m. to 8:00 p.m., Tuesday, April 13, 2021, at Victory Life Church of Orange at 7708 St. Hwy 87 Orange, Texas 77632. Born in Oregon, on July 15, 1968, he was the son of Robert William Hammond and Jennifer (Jones) Hammond. The center of Patrick’s world were his children, whom he adored deeply. He often described himself as a “jack of all trades – master of none”. Patrick had a kind heart and a free-spirit, unique and unlike most people you would come across. You could find him seamlessly transitioning from listening to classic rock music, to baking, and enjoyed riding his motorcycle on the open road. In his youth he shared fond memories of building derby cars with his brother and racing them. He had a green thumb and loved to grow and nurture things. Patrick will be deeply missed by all who came to know and love him. He was preceded in death by his brother, Robert “Bobby” William Hammond II. He is survived by his children, Jenna Lynn Hammond of Vidor, Gavin Vade Hammond and girlfriend Kira Lanee McNiel of Groves, and Patrick Zachary Hammond of Port Neches; one grandbaby on the way, Xylus Porter Hammond; sister, Monica Hammond and husband Barron; brother, Dennis J. Hammond; and his beloved fur-baby, Midget.

The family of Patrick Howard Hammond created this Life Tributes page to make it easy to share your memories.

Patrick Howard Hammond, 52, of Port Arthur, passed away on April...

Send flowers to the Hammond family.