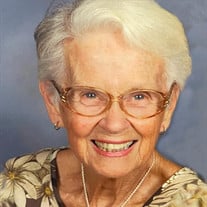 Patricia (Pat) Albers Esterman died peacefully on Monday, May 10, 2021. She was born July 7, 1931 in Cincinnati, Ohio to Frank and Blanche Albers. Pat’s husband of 65 years, Harry Esterman, passed away in 2016. They will be missed by children Sue (Mike) Thaler, Sally (Paul) Lukez, Joyce (Wes) Culbertson, Bob Esterman, and Greg (Michelle) Esterman, as well as grandchildren Carolyn (Josh) Ryeczek, Nylah (David) DeWitt, Alexander Lukez, Stephanie Lukez, Connor Esterman, and Chase Esterman, and five great-grandchildren. Pat was a devoted mother and homemaker and she also had a fulfilling professional career. Before getting married, she was a hair stylist. While raising her five children, she returned to the University of Cincinnati where she received B.S. and M.S. degrees in Nutrition and Dietetics and was subsequently licensed as a professional dietitian. She worked as an Extension Agent for Purdue University and for the WIC (Women Infants and Children) program. She developed innovative programs and consulted with individuals on nutrition issues. Pat was an avid reader. She shared her love of reading with children, volunteering at local schools and libraries. While Pat was quiet and modest about her many contributions to improving her local community through volunteer activities, she took pride in founding a United Way chapter in Franklin County, Indiana, where she resided at the time. Pat and Harry wanted to model a sustainable and self-reliant lifestyle. In 1977 they surprised their children by moving to an 80-acre farm in Milan, Indiana. Their dream was to be able to live off their farm, its harvests and resources. While the house had all the modern conveniences, they added a greenhouse, a wood-burning stove, and even an underground shelter. Besides having a bountiful farm yielding fruits and vegetables, they also raised cows and pigs. Pat and Harry loved to travel, starting their life together with a honeymoon to Ft. Lauderdale. In the 1960s they were founding members of the Travel-A-Go-Go Club in Cincinnati, Ohio. They flew on numerous trips with their club friends. They invested in a 1970s movie about Coco Chanel and had the chance to meet the actors and tour France. They had a lifelong love of Florida, returning for many family vacations to Pensacola, the Keys, the West Coast, Orlando, and culminating in their retirement to The Villages and Briny Breezes. As a 2nd generation Brinyite, Pat continued to be very involved in the community. She and Harry were active in bridge, square dancing, shuffleboard, the history club, and the travel club. Pat also spent a lot of time at the hobby club, the library, and the swimming pool. She treasured the camaraderie and close friendships at Briny Breezes. A funeral service is planned for Saturday, May 29, 2021 at 11:00 a.m., at St. Jude Thaddeus Catholic Church, 6825 Gladys Ave, Beaumont, TZX 77706. A celebration of life will take place later in the year. In lieu of flowers, memorial donations may be sent to the Indiana Alzheimer's Disease Research Center at https://medicine.iu.edu/research-centers/alzheimers/giving or Briny Breezes Library, 5000 N. Ocean Blvd, Briny Breezes, FL 33435.

The family of Patricia Carolyn Esterman created this Life Tributes page to make it easy to share your memories.

Send flowers to the Esterman family.