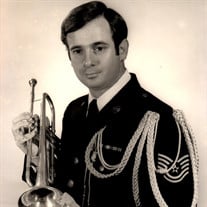 Nulon “Chuck” Chalmers Sanford, III., 72, of Orange, passed away on March 17, 2022, in Beaumont, TX. Visitation will be from 1:00 p.m. to 3:00 p.m., Saturday, April 9, 2022, at The Church of Jesus Christ of Latter Day Saints in Orange, TX, 6108 Hazelwood. Funeral Services will begin at 3:00 p.m. He will be cremated and buried at the Houston National Cemetery in Houston, TX, at a later date. Born in Orange, Texas, on March 12, 1950, he was the son of Nulon Sanford, Jr. and Betty Ruth (Tucker) Sanford. Chuck served bravely in the Air Force and dedicated 20 years of service to his country. He retired as an E7, Master Sergeant, in 1989. He found happiness through music, starting from a very young age. To him, music was the great connector between people. Chuck was a performer whether he played the trumpet, sang in a choir, or composed and arranged music.He even taught himself how to play the piano. He was very interested in his Family History and often spent hours researching where his family tree started and how its branches grew. He loved his family deeply, and tried to teach his six children about Jesus Christ and service to others. Chuck left an impact on all he met during his life’s journey through his numerous callings at church, The Church of Jesus Christ of Latter-Day Saints, and will be deeply missed for years to come. He was preceded in death by his parents, Nulon Jr. and Betty Sanford; brother, Rick Sanford; and sister, Cathy Sanford. He is survived by his former wife, Jenny Arrington Sanford Lowry, mother of his children: Jessica Nugent and husband Raymond of Orange; Joanna Sanford of Orange; Christie Gordon of Orange. He is also survived by his former wife Elizabeth Stewart, mother of: Jonathan Sanford of Orange; Scott Sanford of Austin; and Mark Sanford of Orange; grandchildren: Devon Hill and husband Brett; Lara Brisendine and husband Jesse; Cassandra an: Brenna Gordon; great-grandchildren, Crispin Bohannon and Jason Brisendine; Hinley and Maelie and baby to be born Hill; and siblings; Larry Sanford and wife Marilyn; Carla Hamilton and husband John; and Tina Stanley; along with numerous nieces, nephews, great-nieces and great-nephews. In lieu of flowers, please consider donating to Latter-day Saint Charities (latterdaysaintcharities.org). Please be aware that, due to family members with compromised immune systems, we are asking for visitors and family to wear masks.

The family of Nulon Chalmers Sanford III created this Life Tributes page to make it easy to share your memories.

Send flowers to the Sanford family.