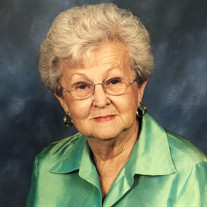 Nova Dee Strickland, 87, of Mauriceville, passed away on August 19, in Beaumont. Funeral services will be 2:00 p.m., Wednesday, August 25, at First Baptist Church in Mauriceville. Officiating will be Reverend Kevin Brown. Burial will follow at Morse Cemetery in Buna. Visitation will be from 1:00 p.m. to 2:00 p.m., Wednesday, August 25, at First Baptist Church in Mauriceville. Born in Lemonville, Texas, on October 13, 1933, she was the daughter of Chester Holts and Iva (Carroll) Holts. Nova lived an extraordinary life. After graduating from Lutcher-Stark High School and attending Lamar College, she began a secretarial job working for Edgar Brown. It was during this time she, by chance, met the love of her life, Jerry Strickland, whom she married six weeks later. The two were inseparable. They ran a dairy farm in Gist for a while until they decided to settle down in Mauriceville, where she became a school secretary for Mauriceville Elementary before retiring after 26 years. Later in life, Nova wrote a book, at the age of 75, titled “Bugscuffle, Are We There Yet?”. What started out as a family history written for her daughters, became a chronicle of Mauriceville and Orange County history. When she wasn’t hosting a family gathering or planning her famous Easter Egg Hunts, Nova enjoyed collecting antiques from different garage sales, thrift stores, and estate sales. She also had a passion for cooking that made her a household name in Mauriceville. Her chicken and dumplings, chocolate cakes, and banana pudding were favorites at family and church gatherings. She was one of the longest members of First Baptist Church in Mauriceville and enjoyed tending to her yard, before settling in and watching old movies with her daughters. Nova will be dearly missed by all those that knew her. She was preceded in death by her parents Chester and Iva Holts; her beloved husband of 44 years, Jerry Strickland; brothers, Morgan Ray Holts, and Howard James Holts and special friend, Pete Frederick. Nova is survived by her daughters, Tanyia Kaye Barnwell and husband Tommy of Mauriceville, and Jerri “Hootsie” Strickland-Hurt of Mauriceville; grandchildren, Tanner Barnwell, Taylor Friend and husband Jonathan, and Lily Hurt; great-grandchildren, Lawson Barnwell, Audrey Friend, and Nathan Friend; sister, Wanda Reinert; nieces, Iva Switzer, Dianna Herman, and Donna Buffington; and nephews, Joseph White, Robert Holts, and Brad Holts. Serving as pallbearers will be Jon Sherwin, Richard Buffington, Chad Jenkins, Randy Hebert, Martin Clark, and Brad Holts. Honorary pallbearers are Roy Dunn, Roger Holsomback, and Melvin McGuire. In lieu of flowers, donations can be made to St. Jude Children’s Research Hospital at stjude.org. The family has asked that all attendants wear a facial covering and practice social distance, in accordance with COVID guidelines and protocols.

The family of Nova Dee Strickland created this Life Tributes page to make it easy to share your memories.

Nova Dee Strickland, 87, of Mauriceville, passed away on August...

Send flowers to the Strickland family.