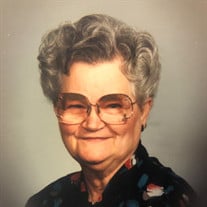 Nora “Tootie” Davis, 96, of Orange, passed away on March 15, 2021, at her home in Orange. Funeral services will be at 11:00 a.m., Saturday, March 20, 2021, at MacArthur Heights in Orange. Officiating will be Brother Jay Thomas and Brother Mike Anderson. Burial will follow at Bland Cemetery. Visitation will be from 10:00 a.m. to 11:00 a.m., Saturday, March 20, 2021, at MacArthur Heights Church in Orange. Born in McLewis, Orange, on January 24, 1925, she was the daughter of William Raymond Granger and Ella Gertrude (Newton) Granger. Tootie has faithfully served her Lord at MacArthur Heights Baptist Church in Orange. She was a member of the Eastern Star Chapter 214 Ramallah Temple 89, the Orange County Historical Society, Daughters of the Nile, and the Orange Nile Club. Tootie was famous for her syrup tea cakes and her divinity candy, which everybody enjoyed. She was spry and strong-willed, everything you could hope to be in a headstrong woman. Tootie will be deeply missed by all those who came to know and love her. She was preceded in death by her husband of over 60 years, Harry Elmo Davis; sister, Lola Duncan; brothers, Willard Granger and Ovie Granger. She is survived by his children, Charlene Wiggins of Mauriceville, Harry Lynn Davis and wife Jo Ann of Beaumont, Malcolm Davis of Orange; five grandchildren; five great-grandchildren; and two great-great-grandchildren. Serving as pallbearers will be Randy Usie, Andrew Usie, John Davis, Charles Capps, Jared Batres, and Bubba Granger. Nora’s family would like to extend a special thank you to Heart to Heart Hospice for their outstanding care and compassion they showed to their loved one.

The family of Nora "Tootie" Davis created this Life Tributes page to make it easy to share your memories.

Send flowers to the Davis family.