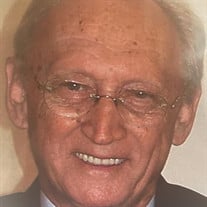 Miles was born in Port Arthur, Texas on August 6, 1930 to Gertha Poole and Miles Hall, Sr. He grew up in Beaumont and moved to Orange with his family as a teenager. He graduated from Stark High School in 1947 and then joined the Merchant Marines. He served in the United States Air Force from 1948 to 1952. In 1954 he married the former Ann Aldredge, also of Orange. Together they had three children. Miles went to work for DuPont Sabine River Works in 1953 and retired in 1993. He served on the boards of the DuPont Employees Recreational Association and Sabine Federal Credit Union. He also a member for many years of Southeast Officials Football Association (SOFA) and as such refereed high school football all over Southeast Texas. Miles enjoyed sports, especially golf, and loved to watch the Bridge City Cardinals. A devout Christian, Miles prayed faithfully, and led his family to the knowledge and love of God. For decades Miles served on the Vestry of St. Paul Episcopal Church, and as a Diocesan delegate. He was a member of the Bridge City Masonic Lodge No. 1345. Miles will be remembered as a loving father and a loyal friend. In addition to his parents, he was preceded in death by his wife, Ann, and his sister, Edna Stanbrough. He is survived by his daughter, Rebecca Rutledge, and her husband, David, of Bridge City; his son, Miles Hall III and his wife, Donna, of Beaumont; and his daughter Linda Burkom and her husband, Maury, of Houston. He was the proud Pawpaw of eight grandchildren and ten great-grandchildren. Also left to cherish his memory are his nephew, R.B. Stanbrough of Austin, and his dear friend of more than 85 years, Johnny Smalley, and his wife, Barbara, of Beaumont. A visitation will be held at 1:00 p.m., with a memorial service to follow at 2:00 p.m., Wednesday, September 1, 2021 at St. Paul’s Episcopal Church in Orange. Memorial contributions may be sent to St. Paul Episcopal Church in Orange.

Miles was born in Port Arthur, Texas on August 6, 1930 to Gertha Poole and Miles Hall, Sr. He grew up in Beaumont and moved to Orange with his family as a teenager. He graduated from Stark High School in 1947 and then joined the Merchant Marines.... View Obituary & Service Information

The family of Miles Aubrey Hall created this Life Tributes page to make it easy to share your memories.

Send flowers to the Hall family.