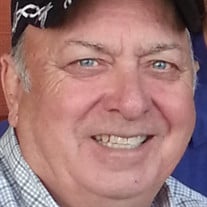 Michael “Mike” Gregory DeRouen, 77, of Bridge City, Texas, passed away on January 6, 2022 at home in the arms of his loving wife Dianne; his angel as he often called her. Funeral services will be 10:00 a.m., Tuesday, January 25, at St. Henry Catholic Church in Bridge City. Officiating will be Father Ernie Carpio. Burial will follow at Memory Gardens Cemetery. Visitation will be from 5:00 p.m. to 8:00 p.m., Monday, with a rosary starting at 6:30 p.m., at Claybar Funeral Home in Bridge City. Born in Port Arthur, Texas, on January 9, 1944, Mike was was the son of Wilfred L. and Christine Hoppe DeRouen. Mike graduated from Bishop Byrne High School in 1961 and went on to receive an associate degree from the Lamar Institute of Technology. After he finished school, he joined the Coast Guard in 1965. Upon completion of his “in service” time with the Coast Guard he was hired on at DuPont in Orange, where he became an electrician. He remained a reserve with the Coast Guard until 1971. Mike happily retired from DuPont in 2002 to spend time with his new bride, Dianne, his kids and grandchildren. He was so proud of his children Kimberly and Bryan, stepchildren and grandchildren. Many, many nights were spent around the table playing games and laughing together. Any events that his grandchildren participated in, PawPaw was always there. When the grandchildren were little, it was no surprise for PawPaw to have a grandchild or two for a month or longer in the summer. Those were the times big memories were made, he loved each and every grandchild and they held such a special place in his heart. Mike was a Christian man who loved life, his family and the Lord. He was an avid volunteer at St. Henry Catholic Church where he did weekly adoration, sang in the choir, delivered communion to the sick, and volunteered with the Knights of Columbus – Council 3406 and his ACTs brothers. He was preceded in death by his wife, Glenda Marie Daigle DeRouen; his parents, Wilfred L. and Christine DeRouen; his nephew, Jody DeRouen; sister-in-law, Barbara DeRouen; and many more loved ones. He is survived by his wife, Dianne Dufene DeRouen of Bridge City; his brother, Terry DeRouen and wife Mary of Nederland; his children, Kimberly Yearwood and husband Lance of Cypress, Bryan DeRouen and wife Jennifer of Bridge City; stepchildren, Eric Dufrene and wife Kim of Lake Charles, Andrea Rueter and husband Eric of Evans, Georgia, and Summer Jenkins and husband Chris of Westfield, Indiana; grandchildren, Keaton Alexander and fiancé Lily Palmer, Courtney Alexander and fiancé James Manners, Matthew Yearwood, Benjamin Yearwood, Jordan Stanley and fiancé LaRae Mirabella, Ashton DeRouen, Kaylee DeRouen, Justin Dufrene and wife Naomi, Austin Dufrene and wife Ashley, Stefan Jenkins, Ella Jenkins, Madelyn Rueter, Abby Rueter, and Andrew Rueter; and great-grandchildren Isaac and Addieline Dufrene. Serving as pallbearers will be Ashton DeRouen, Bryan DeRouen, Keaton Alexander, Lance Yearwood, Kevin DeRouen, and Steve Daigle. Honorary pallbearers are Jordan Stanley and Eric Dufrene.

The family of Michael DeRouen created this Life Tributes page to make it easy to share your memories.

Send flowers to the DeRouen family.