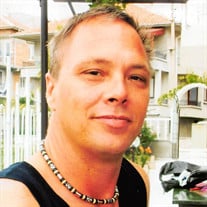 Michael Cast, 57, of Beaumont, Texas, passed away on April 9, 2021, at Beaumont Texas. Memorial Gathering will be 5:00 p.m. to 7:00 p.m., Wednesday, April 14, 2021, at Claybar Funeral Home in Beaumont. Born in Kerrville, Texas, on October 5, 1963, He was the son of John Cast and Fay Baker. Michael was raised in the town of Belton, Texas where he was loved by everyone. He always knew how to make someone smile with his great sense of humor and his lovable personality. He was very handy and enjoyed working on anything mechanical, but he really loved to work on cars. He was a proud owner of a ’69 Super Bee muscle car which he dearly loved. His dream was to be a pilot and only had 20 hours left to receive his pilot’s license. Michael was a perfectionist, never in a hurry especially when it came to meeting the love of his life, Simona Cast. They met while Michael was in Bulgaria and they were happily married on November 1, 2005. He will be dearly missed by those who knew and loved him. He was preceded in death by his father, John Cast. He is survived by his loving wife of 16 years, Simona Cast; mother, Fay Baker; step son, Joshua Byrd; mother-in-law, Violeta Stoilova; father-in-law, Dimitar Tsitselkov and sister-in-law, Anna Tsitselkova.

The family of Michael Cast created this Life Tributes page to make it easy to share your memories.

Send flowers to the Cast family.