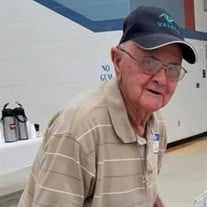 Mayo J. LeBlanc, 94, of Bridge City, passed away on March 2, 2021, in Orange. Funeral services will be 11:00 a.m., Saturday, March 13, 2021, at St. Henry Catholic Church in Bridge City. Officiating will be Father Ernie Carpio. Burial will follow at Hillcrest Memorial Gardens. Visitation will begin prior to the service beginning at 9:00 a.m. with a rosary to follow visitation at 9:30 a.m., at Claybar Funeral Home in Orange. Leading the rosary will be Deacon Chris Penning. Born in Vermillion Parish, Louisiana, on February 16, 1927, he was the son of Oneal LeBlanc and Elena (Reaux) LeBlanc. Mayo was an avid gardener and enjoying growing his own vegetables. He was one of the founding members of the volunteer fire department in Bridge City and a Knights of Columbus Third Degree member. Mayo faithfully served his Lord at St. Henry Catholic Church for the majority of his life. He was a Merchant Marine for 2 years and went on to work at Gulf Oil where he later retired from. Mayo was incredibly hardworking and took great pride in being able to provide for his family. He was known for making and bottling his own famous hot sauce. He was a loving father and adored his grandchildren whom lovingly referred to him as “PaPop”. Mayo will be deeply missed by all those who loved him. He was preceded in death by his loving wife of 69 years, Juanita LeBlanc; four brothers; and his sister. He is survived by his children, Lenora Sayers and husband Brenner, Sharon Ellis and husband Buddy, Carl LeBlanc and wife Sherry, Nita Daigle and husband Barry and Carroll LeBlanc; 10 grandchildren; 21 great grandchildren; four great great grandchildren; and brother, Chester LeBlanc. Serving as pallbearers will be Chad Ellis, Rodney Daigle, Trevor Gonzales, Braydon Gonzales, Kenneth Harris, and Bryan Droddy. Serving as honorary pallbearer will be Parker Ellis. The family would like to extend a special thank you to Patty Dupuis, Mayo’s close friend and caregiver.

The family of Mayo J. LeBlanc created this Life Tributes page to make it easy to share your memories.

Send flowers to the LeBlanc family.