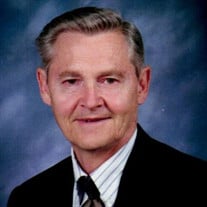 Max Wilburn Staudt, 83, of Orange, Texas, passed away on July 27, 2021 Visitation will be held at St. Francis of Assisi Catholic Church at 1:00 p.m. on Thursday, August 5th. Mass services will follow at 2:00 p.m., Thursday, August 5 at St. Francis of Assisi Catholic Church with Father Sinclair Oubre officiating. Interment will follow at St. Mary’s Catholic cemetery in Orange Texas. Max Wilburn Staudt was born in Fredericksburg, TX on November 5, 1937 to Max William Staudt and Mathilda (Tillie) Staudt. The family relocated to Orange when Max was four years old. He later graduated from St. Mary’s Catholic High School. Upon graduation, he attended Sacred Heart College, but later left to serve in the United States Army. After returning from the army, he worked in his father’s jewelry store while studying gemology. During this time he met Marie Suzanne Kent, whom he later married on July 22, 1967. Max took over full responsibility of Staudt’s Jewelry store in 1979, and in that same year rebuilt the store in its new location on North 16th Street. He was a lifelong member of the Knights of Columbus and St. Francis of Assisi Catholic Church. After retiring, he enjoyed numerous hobbies such as golf, wood-working and gardening, and volunteered his time at Orange Christian Services. He is preceded in death by his parents and his brother-in-law Col. Fred Belcher. He is survived by his loving wife of 54 years, Marie Suzanne Staudt; children Matt Staudt and wife Karen of Beaumont, Stephanie Staudt of Houston and Mark Staudt of Wisconsin; grandchildren, Lauren Collins and husband Kent, Courtney Staudt, and Taylor Staudt; great-grandchildren, Zander Staudt and Lukas Collins; siblings, Vannie Belcher and husband Bill, Jenny Belcher, and Sidney Staudt and wife Maryann; in-laws Barbara Franke and husband Don and Patricia Kent; family friend Kevin Hebert; and numerous nieces and nephews, as well as his furbabies Roman, Zeke, and Hazel. Lastly, a little note about Max. As mentioned, Max was born November 5th … or maybe it was the 4th that we celebrated most of his life. A difference of opinion with state records that through time won’t quite ever be fully resolved. But that’s the thing about Max, he didn’t sweat the little things. He didn’t need fancy new toys and he never met a sale that wasn’t his friend. But he did love the important things, like good food, and time well spent with family and friends. In some ways Max was a simple guy that way, and for us, he was simply the best – a wonderful husband, and a loving father. He will be missed, but we know he continues to be with us as we turn our tears into smiles from many wonderful memories. Serving as pallbearers will be Pat Belcher, Kevin Herbert, Jerry Sears, Ronnie Henson, Sidney Staudt, Taylor Staudt. Honorary pallbearer, Zander Staudt. In lieu of flowers, memorial contributions can be made to Orange Christian Services on 2518 W. Park Avenue in Orange.

The family of Max Wilburn Staudt created this Life Tributes page to make it easy to share your memories.

Max Wilburn Staudt, 83, of Orange, Texas, passed away on July...

Send flowers to the Staudt family.