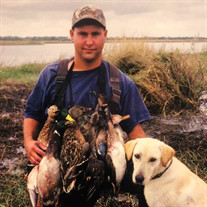 Mark Lonion, 52, of Orange, passed away on June 10, 2021, in Houston. A graveside service will be 10:00 a.m., Tuesday, June 15, at Gueydan Cemetery in Gueydan, Louisiana. Visitation will be from 5:00 p.m. to 9:00 p.m., Monday, at Claybar Funeral Home in Orange. Born in Kaplan, Louisiana, on December 26, 1968, he was the son of Donald Lonion and Diana Mae (Landry) Lonion. Mark worked for Valero for 15 years as an operator and was promoted to a supervisor after years of hard work. In his spare time, he could always be found fishing, or hunting ducks and geese. Mark was the best cook and always enjoyed sharing meals with his family. He adored them more than anything and was also known as “Pawpaw” to his beloved grandchildren. Mark was a loving father, brother, uncle, and friend and will be dearly missed by those who knew and loved him. He was preceded in death by his parents Donald and Diana Lonion. He is survived by his daughters, Morgan Lonion of Orange and Meagan Murdock and husband Ryan of Orange; grandchildren, Kenzie Willey and Issiah Murdock; brother, Neal Lonion and wife Cindy; sister, Vanessa Lonion and husband Mike Parker; brother, Troy Lonion; nieces and nephews, Katherine Welch, Austin Pearcy, Lath Lonion, Craig Lonion, and Gabby Lonion; and numerous other loving family and friends.

The family of Mark Dale Lonion created this Life Tributes page to make it easy to share your memories.

Send flowers to the Lonion family.