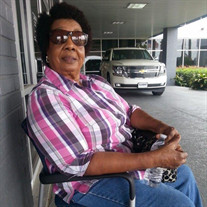 Lois A. Farr was born in Biloxi, Texas, on February 1, 1939, to the late Obie E. Farr and Willie Mae (Nelson) Farr. She passed away, peacefully, on Friday, September 3, 2021, in St. Luke’s Hospital in Houston, Texas, knowing that she was much loved by family and friends. A visitation will start at 1:00 p.m. with a graveside service to follow at 2:00 p.m., Saturday, September 11, 2021, at Biloxi Evergreen Cemetery, in the Biloxi Community in Newton County. She grew up and attended school in the Biloxi community with her three older brothers, one sister and three younger brothers. She was baptized into the Baptist Faith at an early age at the age by Reverends Kenebrew and C.C. Farr. She remained in Baptist faith. Lois worked as a caregiver in Houston at St. Joseph Hospital and Park Manor Nursing Home. She married Ernest Cooper from Magnolia Springs, Texas, and this union, was blessed with two daughters, Vivian J. Cooper and Loretha Y. Cooper. Both of Houston, Texas. She later married Charles Douglas Ford, and was again, blessed with two children, daughter, Troylene D. Ford, and son, Tracy D. Ford. She retired in Beaumont, Texas. She is survived by one sister, Opal D. Farr-Samuel of Houston, Texas, one brother, Marvin Nelson Farr of Houston, Texas, four children, 10 grandchildren, four great grandchildren, and one great-great grandchildren, and a host of nieces, nephews, and great nieces and nephews. She was preceded in death by her parents, Obie E. and Willie Mae Farr, five brothers, Obie Edward Farr, Jr., Hoy Sylvester Farr, Utah Joseph Farr, Garland Richard Farr, Morgan Philander Farr, and one grandson, Terrance M. Lusk.

The family of Lois A. Farr created this Life Tributes page to make it easy to share your memories.

Send flowers to the Farr family.