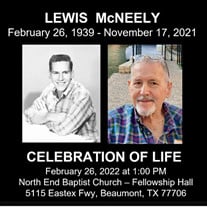 Lewis H. McNeely died November 17, 2021, in Beaumont, Texas, leaving behind heartbroken friends and family and a house full of amazing finds, including a well-curated collection of books about Texas. He was a natural storyteller with an incredible memory and the ability to amaze you with a newfound fact or send you laughing with one quick-witted line. Raised in Beaumont, he was born to Tallulah Ercelle Rankin McNeely and Louis Otis McNeely on February 26, 1939. Thomas Connally “Tom” Settle became his loving stepfather on Ocober 12, 1943. He spent his summers in Kountze with his grandparents helping out on the farm and jumping from the McNeely Bridge into Village Creek. A Boy Scout, he was the youngest Waterfront Director in Texas at Camp Urland in Woodville, Texas. He returned for several summers teaching hundreds to seim in their spring fed lake. He was a graduate of French High School, Class of ’57; a proud Buffalo until the end. Whether as a quiet observer or Captain of the football team, he cherished those years, memories and friendships his entire life. In 1962, he graduated from Lamar Tech, now University, with a BBA in Accounting. He was honorably discharged from the Army as a Sergeant in 1963. While at French he met the love of his life, Linda Jane Box. Linda and Lewis married in 1960 at North End Baptist Church. They eventually moved to Dallas, joined First Baptist Church, and raised their two amazing daughters - Mollie and Amy-Beth - both of whom have the lasting privilege of knowing, without a doubt, they were loved by their Dad. Throughout his life Lewis had a passion for books, ancestry and Texas History, especially Hardin County. He loved garage sales, antiques, old highways, college towns and the occasional slot machine. Most of all, he loved his girls, and sharing those things with them whenever he could. Lewis loved adventure. He made things fun! Going for a drive meant choosing a direction following it for hours just to see what was there, taking a different route home. Somewhere along the way his eye would light up and a slow grin appear as he pointed out the real reason for the given direction, while telling a fascinating story never before heard. When most were retiring, he moved to New York City for several years and loved every minute of it. Eventually, he returned to Kountze and North End Baptist Church. Now home, the desire to reconnect with FHS friends and alumni was strong. He designed and created a newsletter. The Buffalo Nickel. The project took on a life of its own and revealed a hidden talent for writing. The support, encouragement and feedback kept it going. Keeping everyone in touch through stories and news, remembering birthdays with homemade cards, filled hime with purpose. It was a calling. Left behind are two precious daughters, Mollie Cathryn (McNeely) Branham and Amy-Beth McNeely and his best friend, Linda Jane McNeely. He is also survived by his brother, Thomas Ernest “Tom” Settle, wife Linda and their sons William Connally Settle, David Eugene Settle and Robert Lewis Settle; brother, Otis Earl McNeely, his wife Sabrina and children Shana Renee McNeely. Anthony Scott McNeely and Christopher Earl McNeely; granddaughters Lindy Catherine (Winckler) Geiger and husband Jon, and Jon, and Abby Noel Winckler; and great-grandchildren Wyatt Joseph Geiger and Sonora Cathryn Geiger. He was preceded in death by his parents and brother William A. “Bill” Settle. Family and friends will celebrate Lewis on his birthday, February 26, 2022, in Beaumont, Texas. Please share a memory to [email protected] If so inclined, please consider a donation to the Hardin County Genealogical Society and Library, in his honor.

Lewis H. McNeely died November 17, 2021, in Beaumont, Texas, leaving behind heartbroken friends and family and a house full of amazing finds, including a well-curated collection of books about Texas. He was a natural storyteller with an incredible... View Obituary & Service Information

The family of Lewis McNeely created this Life Tributes page to make it easy to share your memories.

Send flowers to the McNeely family.