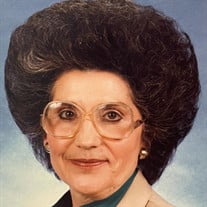 LaVerne S. Baldwin, 92, of Orange, passed away on December 31, 2021, at her son’s home in Orange. Funeral services will be 2:00pm, Wednesday, January 5, 2022 at Claybar Funeral Home in Orange. Officiating will be Reverend Gary McCormick of First Christian Church in Orange. Burial will follow at Orange Forest Lawn Cemetery in West Orange. Visitation will be at 1:00pm, Wednesday, at Claybar Funeral Home in Orange. Born in Waverly, Missouri, on October 5, 1929, she was the daughter of William Stoneking and Arline Weaver Stoneking. She was Valedictorian of her graduating class and crowned Apple Queen in 1947 in her home town of Waverly, Missouri. She was a very hard worker, and worked her way through high school living with and taking care of her grandmother. Throughout life she would travel the country with her husband Greydon, and they would drive from the east coast to the west coast in their travel trailer. She enjoyed playing bridge, dominos, and other card games with her husband as well. She was a faithful member of the First Christian Church in Orange for many years. LaVerne was a devoted wife, mother, sister, and aunt and she will be deeply missed by all that knew and loved her. She was preceded in death by her parents, William and Arline Stoneking; her husband of 74 years, Greydon G Baldwin, Sr.; and her siblings, Wilma Edmonds and Herman Stoneking. She is survived by her son, Greydon G. Baldwin, Jr. and his wife Judy of Orange; her grandchildren, Mindy and Robert Currie of Orange, and Laura and Morgan Reed of Katy; her great-grandchildren, Jaycee Reed, Peyton McKee, Mia Reed, Paige McKee, Sullivan Reed; her brother, Charles Stoneking and wife Rose of Port Arthur; and multiple nieces and nephews, including her namesake Karen LaVerne Edmonds, Kay Faulk, Eddie Faulk, Linda Crowell, Keith Stoneking, John Stoneking, Kurt Stoneking, Mike Cotton, Jerry Cotton, Dale Baldwin, Sharyn Pinter and Terry Baldwin. Serving as pallbearers will be Robert Currie, Morgan Reed, Peyton Grey McKee, Sullivan Reed, Eddie Faulk, Mark Foreman and Michael T. Barnes. Serving as honorary pallbearers will be Mike Cotton and Jerry Cotton. In lieu of flowers, memorial contributions can be made to First Christian Church at 611 9th St., Orange, Texas 77630.

LaVerne S. Baldwin, 92, of Orange, passed away on December 31, 2021, at her son&#8217;s home in Orange. Funeral services will be 2:00pm, Wednesday, January 5, 2022 at Claybar Funeral Home in Orange. Officiating will be Reverend Gary McCormick... View Obituary & Service Information

The family of LaVerne S. Baldwin created this Life Tributes page to make it easy to share your memories.

Send flowers to the Baldwin family.