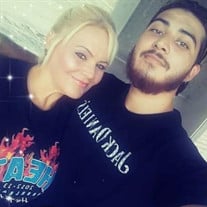 Kristian Omar Montante, 26, of Beaumont, passed away on August 14, 2021, in Lumberton. A memorial gathering will be held from 5:00 – 8:00 p.m., Friday, August 27, 2021, at Claybar Kelley-Watkins Funeral Home in Beaumont. Born in Beaumont, Texas, on August 24, 1994, he was the son of Stacy Broussard. Kristian was a long-time resident of Beaumont, where he graduated from Ozen High School. He excelled in football and basketball during his high school years. Kristian loved his mother more than anything, he was a momma’s boy through and through. He was extremely close with his family, but his nieces held a special place in his heart. Kristian enjoyed being outside soaking in the sun. He was a big boy with a sweetheart and will be deeply missed by his family and friends. He was preceded in death by his great grandparents, Richard and Jane Dyson; and grandfather, Harold Roger Buchanan. He is survived by his mother and stepfather, Stacy and Michael Broussard; grandmother, Windy Dyson who he shared a special bond with over football; grandfather, Mauricio “Magui” Torres; brothers, Juan Gonzales, Emilio Montante; sister, Andrea Montante; stepbrother, Bradley Broussard; uncles, Chris Buchanan and wife Suzanne, Charles Berwick and wife April; cousins, Douglas Buchanan, Cainan Buchanan, Dominic Buchanan, Ethan Berwick, Charlize Berwick, Alix Wilson; and his nieces who he shared a very special bond with, Selena Lane, Mia Morris, and Carmen Benavides. And a special thanks to his godfather Javier Garcia and his aunt’s Cynthia Shaw, Janet Chandler, and DeeDee for loving my son as their own. We would like to thank two very important people John Mann and Joe Miranda. They were not just bosses but mentors and friends to my son. They played a very important role in our lives.

The family of Kristian Omar Montante created this Life Tributes page to make it easy to share your memories.

Kristian Omar Montante, 26, of Beaumont, passed away on August...

Send flowers to the Montante family.