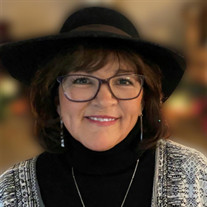 Kristi Cole Ellis, 60, of Bridge City, passed away on August 25, at her home in Bridge City. Graveside services will be 10:00 a. m., Wednesday, September 1, at Richey Cemetery in Effie, Louisiana. Officiating will be Pastor Lou Gordon. Visitation will be from 4:00 p. m. to 6:00 p. m., Sunday, August 29, at Claybar Funeral Home in Bridge City. Born in Alexandria, Louisiana, on August 8, 1961, she was the daughter of V. W. “Butch” Cole and Sandra (Aymond) Cole. Weezer was an eccentric woman, the type that would dress up in costumes, if given the opportunity. Fall and Halloween were her favorite times of the year. She worked as an art teacher for 20+ years before retiring. The last few years, after retiring, she became an art teacher for the Stark Museum. Kristi was a woman of simple joys, whether it was arts and crafts, teaching, or just snuggling up on the couch with her cat. If not napping, a perfect day for Weezer, was coffee in one hand, murder mysteries on the television, and being surrounded by her family. Kristi was a strong and independent woman that would give anything to help her family, friends, or students. She will be deeply missed by all those that cherished her. Kristi is survived by her parents, V. W. “Butch” and Sandra Cole; children, Brittany Ellis and fiancé Toby Landry, Tara Mendoza and husband Lance, and Mason Ellis; grandchildren, Watson Mendoza and Wren Mendoza; her siblings, Tracy Patten and husband Mark, Craig Cole and wife Crystal, and Tori McNeal and husband Chad; as well as nieces, Ali McNeal and Stella Cole, nephews, Cole McNeal and Christopher Cole. Serving as pallbearers will be Mason Ellis, Lance Mendoza, Craig Cole, Chad McNeal, Cole McNeal, and Christopher Cole. Honorary pallbearer is Watson Mendoza. In lieu of flowers, memorial contributions can be made to the Stark Museum.

Kristi Cole Ellis, 60, of Bridge City, passed away on August 25, at her home in Bridge City. Graveside services will be 10:00 a. m., Wednesday, September 1, at Richey Cemetery in Effie, Louisiana. Officiating will be Pastor Lou Gordon. Visitation... View Obituary & Service Information

The family of Kristi "Weezer" Ellis created this Life Tributes page to make it easy to share your memories.

Kristi Cole Ellis, 60, of Bridge City, passed away on August...

Send flowers to the Ellis family.