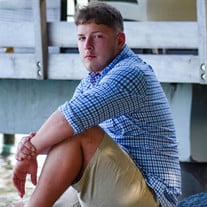 Khris “Mann” Taylor II, 18, of Bridge City, passed away on March 2, 2021, in Houston. Funeral services will be 2:00 p.m., Monday, March 8, 2021, at Claybar Funeral Home in Orange. Visitation will be from 5:00 p.m. to 8:00 p.m., Sunday, March 7, 2021, at Claybar Funeral Home in Orange. Born in Beaumont, Texas, on March 14, 2002, he was the son of Khristopher Taylor and Cheryl Taylor. Khris could be best described as an old soul, with wisdom beyond his years. From the moment he was born, he brought joy into every room he entered. Khris was a talented football player, playing his entire life, playing at West Orange Stark during high school. He graduated from Bridge City, where he excelled in academics, being the class clown, and forming friendships wherever he went. Khris adored his family and centered his life around them. He could often be found doting on his sisters and spending every chance he got with his grandparents. His happy place was at crawfish boils, surrounded by his family. Khris was a car and shoe connoisseur, often admiring the finer things in life, but still taking great pleasure in all the simpler joys of life. He left an impact on everyone he met and will be deeply missed, but lovingly remembered for years to come. He is survived by his father and step-mother, Khris and Cheryl Taylor; mother, Brandye Bishop; grandparents, Tommy & Debbi Wheeler, Charlotte Seals, Jim McQuerry, Mike & Kelly Meriwether, and Kenneth & Judy Taylor; siblings, Trinity Taylor, Braxton Wortham, and Addisyn Taylor; and uncles, T.J. Taylor, Andy Taylor and wife Kerrie, and Craig Walters and wife Amberlee; along with numerous cousins, extended family and loving friends. Serving as honorary pallbearers will be Craig Walters, T.J. Taylor, Andrew Taylor, Braxton Wortham, and Jackson Tims.

The family of Khris "Mann" Taylor II created this Life Tributes page to make it easy to share your memories.