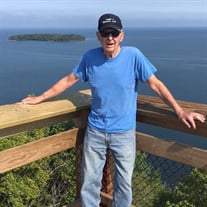 Kenneth E. Romeis, 93, of Orange, passed away on April 28, 2022, at his home. Born in Kingsford, Michigan, on April 16, 1929, he was the son of Elmer and Edna Romeis. Kenneth left home at an early age, joining the Merchant Marines. He traveled the world’s waterways both domestically and internationally. He later served in the United States Army. Kenneth met the love of his life while serving in the Army in 1949. After a brief courtship, he and his young bride were married. They raised five children together and were an outstanding example to their children, and to all who knew them, of what it takes to be a success in the things that truly matter in this life. Ken, as he was known by most, was a long time resident of Orange. He moved to the area in 1973 with his wife and three of his five children. He worked for Levingston Shipbuilding Company in Orange for many years and was the superintendent of the guard force and janitors. He always had time to visit with acquaintances, family, friends, or complete strangers, wherever he might be. He was blessed with nearly 30 years of retirement and loved every minute. He enjoyed doing a variety of things but his favorite times were spent with family, both near and far, at his home or theirs or special places where they gathered together. There is no way to sum up such a life well lived, in just a few words, by a man who was loved and respected by so many. After 67 years of marriage, Kenneth was preceded in death by his wife, Mary “Margaret” Stephens Romeis, who passed away in 2016. He was also preceded in death by his parents, Elmer and Edna Romeis; siblings, Donald Romeis, Delores Scott, Shirley Bosl, Marilyn Ebidon; son-in-law Joe Will. He is survived by his children, Terry Romeis and wife Tess of Cedarburg, Wisconsin, Kenneth Romeis and wife Susan of Cedarburg, Wisconsin, Steven Romeis and wife Lisa of Orange, Texas, Susan Will and husband Dennis of Orange, Texas, Pam Brown and husband Ben of Livermore, California; grandchildren, Bridget Wilson and husband David, Heather Williams and husband Robin, Kristen Romeis and husband Dan, Kyle Romeis, Tess Romeis, Jason Cook and wife Katy, Austin Brown, Emily Brown, Alisha Cleveland, Dillion Cleveland and wife Victoria; great-grandchildren, Ashton, Jayden, Rhylan, Teagun, Colbin, Bowman, Elliot, Ila, Louis, Peyton, Memphis, Jackson, Mason, Payton, Jameson, Brayden, Easton, Keaton, and Hadley. He was truly loved by everyone who knew him and will be deeply missed by all. The family will have a private memorial service at a later date and request that those who wish to express sympathy, consider making a donation to their favorite charity in memory of Ken.

Kenneth E. Romeis, 93, of Orange, passed away on April 28, 2022, at his home. Born in Kingsford, Michigan, on April 16, 1929, he was the son of Elmer and Edna Romeis. Kenneth left home at an early age, joining the Merchant Marines. He traveled... View Obituary & Service Information

The family of Kenneth Romeis created this Life Tributes page to make it easy to share your memories.

Send flowers to the Romeis family.