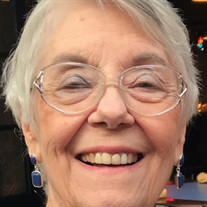 Kathryn Josephine Williams passed away on March 5, 2021, at the age of 80. Ms. Williams was born on August 14, 1940, at the Hotel Dieu in Beaumont, Texas, as the daughter of Floyd Everett Williams and Villa Mae Morehead Williams. She lived... View Obituary & Service Information

The family of Kathryn Josephine Williams created this Life Tributes page to make it easy to share your memories.

Send flowers to the Williams family.