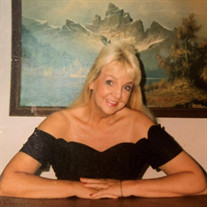 Judi Brown, 76, of Orange, passed away on September 16, 2021, in Orange, Texas. Funeral services will be 3:00 p.m., Thursday, September 23, 2021, at Claybar Funeral Home in Orange. Officiating will be Murry Ray of First United Pentecostal in Bridge City. Visitation will be at 2:00 p.m., Thursday, at Claybar Funeral Home in Orange. Born in Oakdale, Louisiana, on December 30, 1944, she was the daughter of Doug Grimes and Mildred Perry. Judi was a most loving and kind wife, momma, nana, and great-nana. Her family was the focus of everything important to her. She spent her youth growing up in the piney woods of Jasper Texas. It was during her time spent in nature that she developed her affection for wildlife. Judi had dogs and cats growing up, but her favorite pet was a raccoon named Josephine. She also had a pet havalina named Arnold, but he was not near as fun as Josephine. Her lifelong dream was to get married and start a family. She married her high school sweetheart, Wayne Brown. Judi was an exceptional wife and mother, but unfortunately, she became a widow after only eight years of marriage. Wayne remained the love of her life and was a part of many of her conversations, truly a testament of her love and devotion to him. In Judi’s younger years, she treasured putting on her rhinestone heels, sparkly dresses and going out dancing whenever she could. She cared deeply for her family, neighbors and the less fortunate. She was always the first to offer help or a meal to those in need. She ensured no one that crossed her threshold left hungry. Judi also loved to care for others; her second lifelong dream was to become a Nurse. She spent most of her later years in healthcare and retired as Home Health Nurse. In her spare time, she enjoyed spending days at the beach sunbathing, searching for seashells, going fishing and adoring her animals. Her beloved dog Tia was never far from her thoughts and was talked about often. Her “grand doggies and grand kitties” were always included at holiday times and given beautiful crocheted and cross-stitched gifts. She was a strong-willed, independent and resilient woman, a vibrant storyteller and a very gifted writer. In 2013, one of her stories was published in the Reader’s Digest. She loved to curl up with family on a rainy day grabbing popcorn and a Coke to watch an old Hollywood classic movie. Judi was a passionate cook, she learned as a little girl from her neighbor Mrs. Dean, and took great pleasure in nurturing her loved ones with home-cooked meals. Judi was a wonderful woman and she will be dearly missed by all who knew and loved her. She was preceded in death by her loving husband, Wayne Brown; parents, Doug and Mildred Grimes; brothers, Levon Grimes, George Martin Grimes, and Jimmy Grimes; and close sister in-law, Donna Clotiaux. Those left to celebrate her life and cherish her memory are her son, David Brown and wife Janet of Tomball, TX, and son Robert Brown and wife Lesli of Round Rock, TX, and son Chad Brown and wife Regina of Orange, TX; grandchildren, Rachel Porter, Torey Sphar and husband Ryan, Trapper brown and wife Maren, Matthew Brown, Elizabeth Brown, Lilly and husband Noah Sciabana, Trent Brown and wife Kaylin; great-grandchildren, Garret, Sadie, Marissa, Penelope, Kenna and one on the way; her nieces Crissy Barker, Laura Ann Clotiaux, and Jannie Clotiaux, and her nephews Altus Barker, Jimmy Barker, Rocky Clotiaux and Shane Clotiaux.

The family of Judith "Judi" Ann Brown created this Life Tributes page to make it easy to share your memories.

Send flowers to the Brown family.