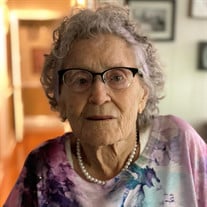 Joyce Mae Duplissey Young went to her heavenly home on August 20, 2021 at 96 years of age. She was surrounded by family in her home. Joy was preceded in death by her parents Richard and Mattie Duplissey, her husband Louis David Young Jr., her... View Obituary & Service Information

The family of Joyce Duplissey Young created this Life Tributes page to make it easy to share your memories.

Send flowers to the Young family.